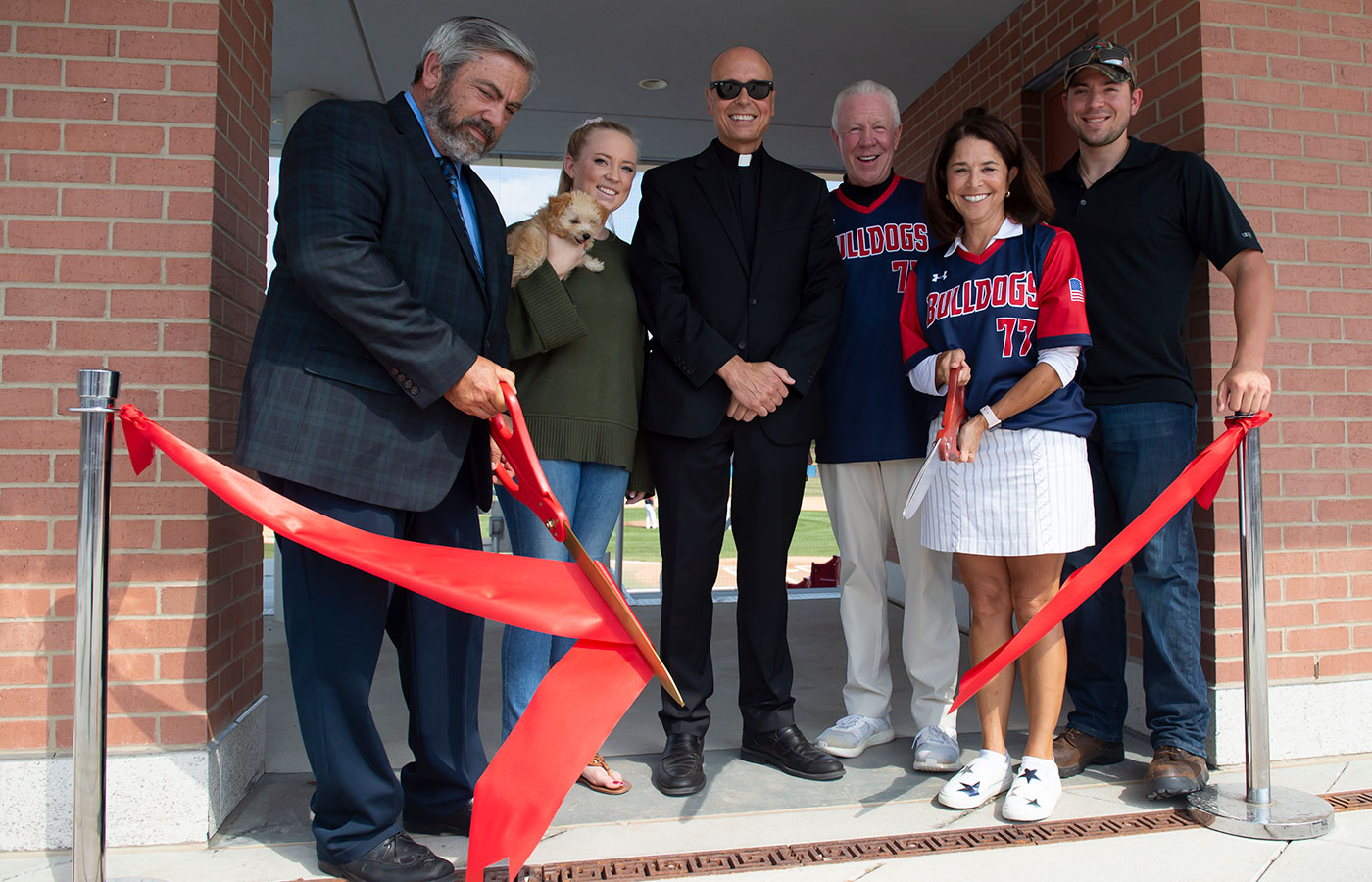 The festivities kicked off Friday with the annual alumni golf tournament, athletic hall of fame, and academic receptions. Saturday featured tailgating, athletic games, and the kids zone—complete with a petting zoo and pumpkin patch—and, for the first time ever, fireworks.

“The weekend was terrific,” said Mike Ritchie ’90, director of alumni relations. “This type of event only happens with the help of many people, and we’d like to thank all of the Centaurs and Bulldogs who made the weekend a memorable one.”

One of the biggest draws of the weekend was the dedication of Weiland Park—DeSales’ new 500-seat baseball stadium—which was made possible thanks to the generous support of John ’77 and Katherine Weiland.

“Weiland Park is more than just a baseball field,” Father James J. Greenfield, OSFS ’84, told the crowd. “It’s the center of University life that gathers and builds community, where friendships are grown and begun, where individuals unite to become a team, where school pride is developed as a virtue, and where a phenomenal day like today brings us to appreciate the love of God, who can create a world of stunning beauty.”

Calling it a historic day for DeSales, Fr. Greenfield thanked Pennsylvania Senator Pat Browne, who was in attendance, for helping the University secure a one million dollar grant for the stadium. He also thanked the Weilands for their more than $1.4 million dollar gift—the largest in the history of the University by an alum.

For John Weiland, the gift stemmed from his first day on campus back in 1973. When he went to register for classes as a freshman, he was told he was $1,000 short on tuition. His fate was in the hands of Father William Guerin—the treasurer at the time—who told Weiland he would take a chance on him after their first meeting. The two developed a deep and lasting friendship, with Fr. Guerin becoming a mentor to the entire Weiland family.

“When Kathy and I first started talking about this, it was really because of the great mentors that I had when I was here and how much that meant to us as a family and to me, personally and professionally, throughout the years,” Weiland said.

Father Greenfield presented the Weilands and Senator Browne with baseballs and bulldog  jerseys, before they blessed and cut the ribbon on the new stadium. After the ceremony, the Class of 1969 continued its 50th reunion celebration with a dedication of its own in the Gambet Center. The group dedicated its class gift—a double helix—which symbolizes the transformation of Allentown College to DeSales University.

“What a unique experience we all had being the first class at AC,” said John Lazur ’69. “We’re the charter members. We were not only freshmen, but also upperclassmen. I am very proud to stand here and say AC 1969 is forever in the DNA of DSU.”

The group also visited Dooling Hall, where a memorial wall was recently put up to tell the story of the founding of Allentown College from the Class of ’69’s perspective. The wall represents the class’s journey through pictures and stories.

“It talks about our history, our feelings, our accomplishments, and our legacy,” said Vince Cardile ’69, who championed the idea. “The story will never be forgotten as long as Dooling Hall stands.” 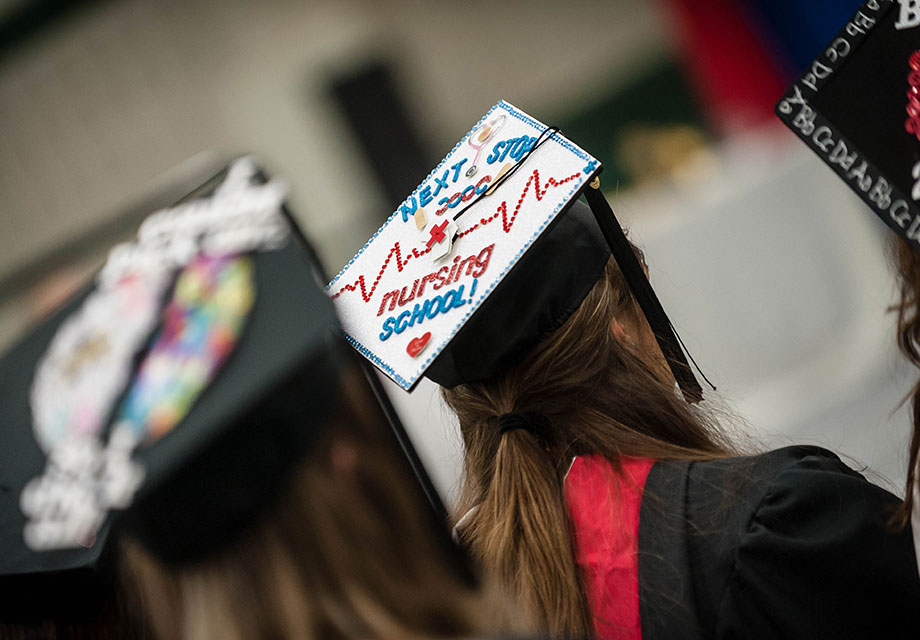 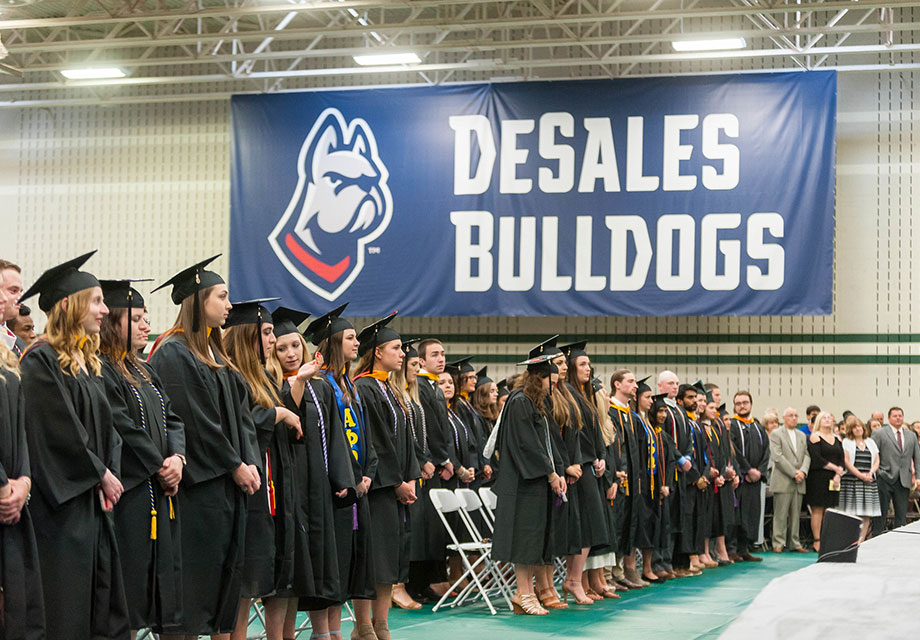