Anchor of the Italian Market 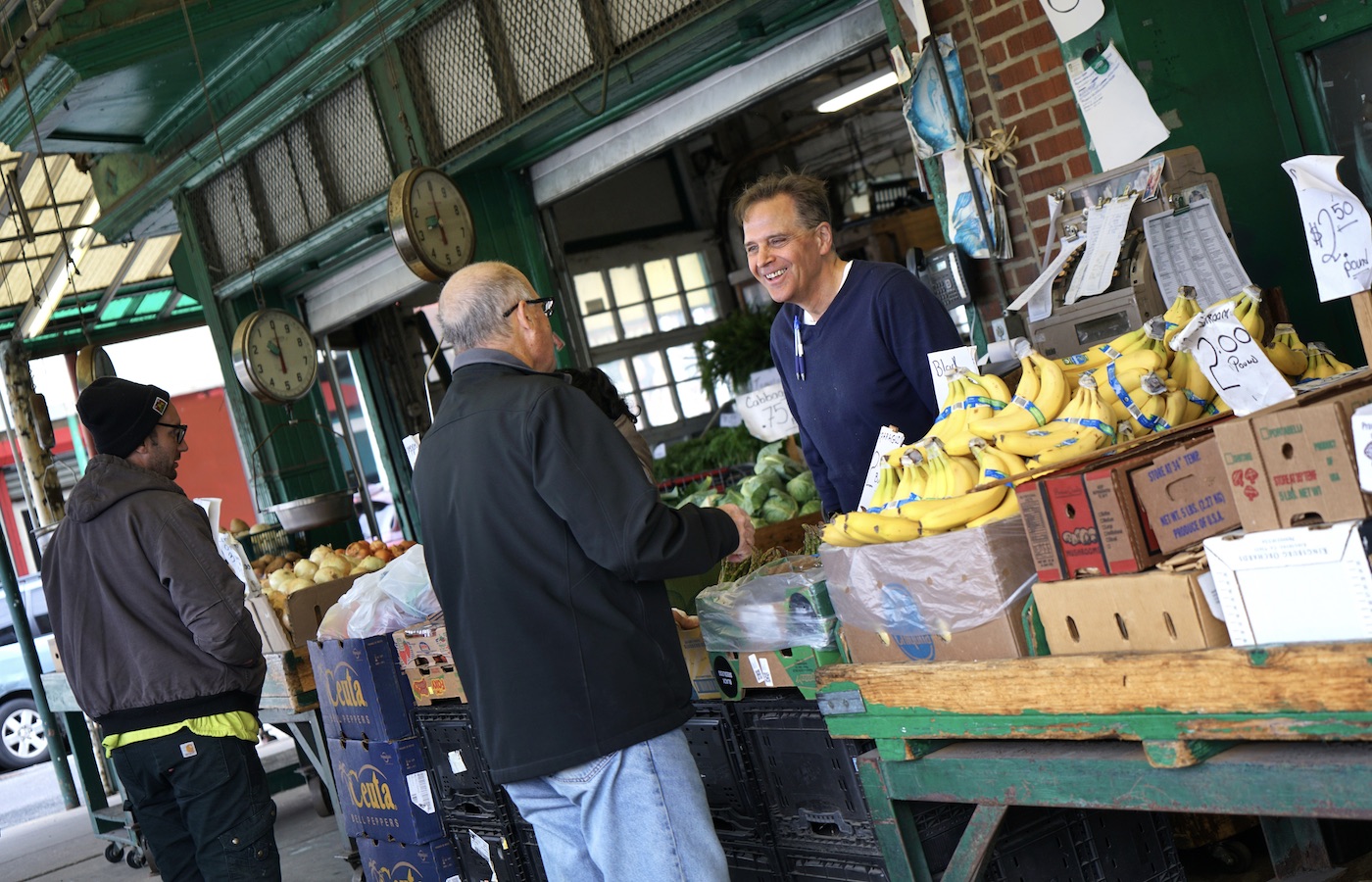 It’s not easy to stand out in Philadelphia’s legendary Italian Market. The sights, the sounds, the smells, and the big personalities manning the cash registers and counters are all competing for attention across 20 crowded, lively city blocks. And yet, Wally Giordano manages to make an impression.

“He’s a tall guy,” says Bill Markham. “Big, broad-shouldered guy. Just has a really warm, embracing smile that’s on his face all the time.” Markham, a 1973 graduate of DeSales University (then Allentown College of St. Francis de Sales), first met Giordano at the market about eight years ago. But Giordano has been a fixture at 9th and Washington streets for much longer. He and his brothers, John and Gene Giordano, run P&F Giordano Market, a business started by their grandparents Paul and Frances just over 100 years ago.

Frances bought the property that would become the now landmark storefront with money she received from the government following the death of a brother in World War I. Wally Giordano, like everyone else in his family, started spending a lot of time at the market at a young age.

“You learn what real hard work is,” he says. His first job was selling rolls at the age of 5 years old. He can remember trying to figure out pricing for chicken legs while he was in grade school. Later, he’d graduate to running the poultry and meat sections.

When it came time to start thinking about picking a college, Giordano’s high school headmaster had a lot of good things to say about Allentown College. “When I arrived on campus, I was blown away,” he recalls. “The campus was beautiful, and the friendliness of the faculty and students was amazing. I just knew immediately this was where I belonged.” And since the campus was just a quick car ride up the turnpike, Giordano could still work at the market when he was needed.

After graduating with a degree in business administration in 1981, there was little doubt where Giordano would end up. “I took one day off, and then went right back [to the market],” he says with a laugh. But he returned to his roots with a fresh perspective, thanks to his time at DeSales.

“The education I received, the lessons I learned, it just resonates years later in my personal life, my business life, my religious life. It just keeps coming back,” Giordano says. He names the late Father Bill Guerin, OSFS, a former treasurer and member of the school’s Board of Trustees, as one of his mentors. “Father Guerin always told me, ‘Get it done, get it done now, and be positive.’”

That can-do attitude helps propel him through a lot of long days; Giordano works from 5 a.m. until 5 p.m., six days a week. And perhaps it’s also the reason why he didn’t bat an eye when a neighbor in need showed up on his doorstep several years ago.

Giordano remembers the encounter this way: “They pulled up in a van. These three ladies got out. They explained that they were running a kitchen for the poor, and asked if we could help them out?” The women were from the Blessed Sarnelli Community, a self-funded Catholic ministry in Philadelphia’s Kensington section that takes its name from Saint Gennaro Sarnelli. The group prepares and serves meals five days a week for the city’s homeless and less fortunate population. Kim Collins is the center’s director. “Here was an opportunity for me to help someone who really, really appreciates it,” Giordano says. He began providing Collins with a variety of produce and other items at a deep discount.

The van became a regular fixture outside P&F Giordano. It was during one of these runs when Giordano met Markham, who has volunteered with the Sarnelli Community and serves on its Board of Trustees. Markham has witnessed several transactions between Collins and Giordano: “Wally always comes right over and says, ‘Kim, what do you need?’”

Employees are then dispatched to grab the goods—sacks of potatoes, lettuce, onions, peppers, tomatoes, tangerines, lemons, limes, spices, etc.—and load up the van. Giordano will make sure to throw in extra goodies during the holidays—perhaps a Christmas tree or Easter candy. Then it’s time to settle up. “Every time I’ve gone there—no matter what she gets or what she buys—it’s always $21,” Markham says.

During that initial meeting, Giordano and Markham bonded over their shared alma mater. Something else they had in common: They both met their future spouses at the school. Patty Markham graduated in 1976, and Nicki Giordano attended DeSales for a year before transferring to La Salle University.

Both men are effusive in their praise for what the Sarnelli Community, which is primarily volunteer driven, is able to accomplish each and every week. “It’s just a tremendous ministry,” Markham says. He and Giordano are among nearly a dozen DeSales alumni who currently contribute to the organization and its mission in some way.

Because of his work commitments, Giordano isn’t able to get back to the DeSales campus as often as he’d like. But he recalls his days at the school with fondness. “I can look back at my college experience as some of the best years of my life,” he says. “It gave me the opportunity to grow into the best vision of myself and to make lifelong friendships along the way.”

Giordano is 62 years old and isn’t sure who will take over the market when he and his brothers retire. Of course, don’t expect that to happen any time soon. “I’m thinking I have 28 more years to go,” he says. “I’ll be 90. That’s a good old ripe age to retire.”