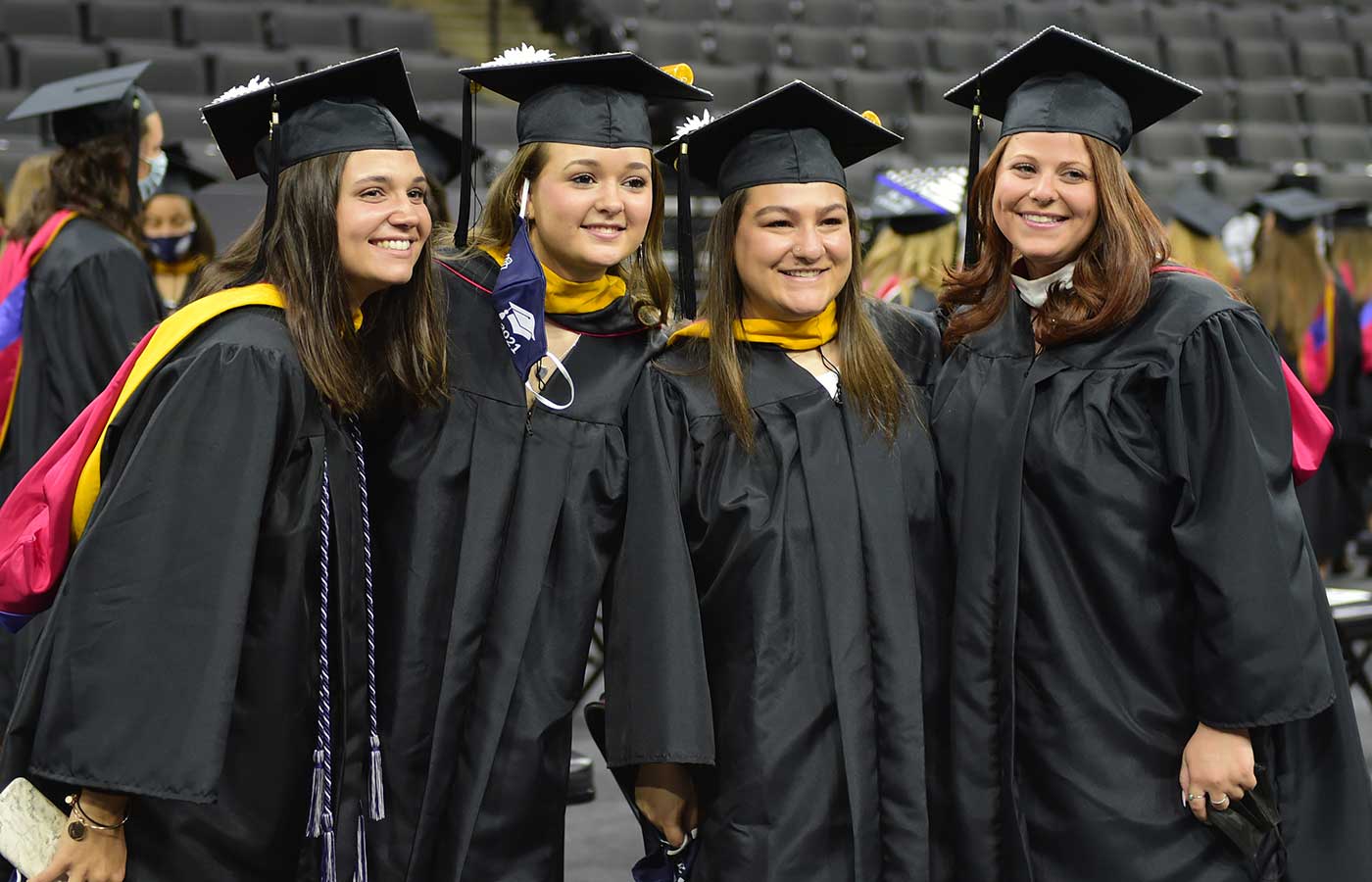 DeSales University honored the Class of 2021 for its resilience and determination during a celebratory yet bittersweet ceremony.

The University’s 52nd Commencement kicked off at the PPL Center in Allentown with a special recorded message from faculty and staff congratulating graduates and wishing them well.

Margaret Arnold, president of the Class of 2021, offered words of welcome to her fellow graduates as she celebrated and reflected on their accomplishments.

“I am sure most of you would agree that this year was not how we expected to be finishing out our education. It has been full of surprises, disappointments, loss, and unexpected changes. But we pulled through, and we are all here today to celebrate the accomplishments we made despite all that we had to endure.”

Father James Greenfield, OSFS ’84, president of DeSales, congratulated the class for its flexibility, cooperation, and resilience during the COVID-19 pandemic. He also paid tribute to Matthew Hammerstone and Sean Hanczaryk, two students who were tragically killed in accidents just months apart.

“Today, we remember Matthew Hammerstone and Sean Hanczaryk as beloved members of the Class of 2021, and we assure their families of our love and condolences, and they will both receive their degrees posthumously today,” Fr. Greenfield said.

He then conferred degrees upon 455 graduating students, including undergraduates and graduates. An additional 521 students, who have either already received their diplomas or who will be receiving them in the next several months, also were recognized.

In a heartfelt moment of solidarity, the crowd gave a standing ovation and Fr. Greenfield embraced Hanczaryk’s parents as they walked across the stage to receive their son’s diploma.

After all of the diplomas were awarded, Brother Daniel Wisniewski, OSFS, provost, presented the Provincial Medal of Honor to Joseph Freemont. The honor is awarded to the graduate who best exemplifies the spirit of St. Francis de Sales. Freemont, who also sang the National Anthem at the beginning of the ceremony, served as executive president of the Student Government Association.

Bro. Wisniewski also presented the President’s Medal to Brianna Lonergan. The medal is awarded to the graduate who has attained intellectual maturity. Lonergan also delivered the Benediction prayer to close the ceremony, and she received the Medical Studies Award for Academic Excellence during a departmental ceremony.

The ceremony was also live streamed on DeSales University’s YouTube channel, with thousands tuning in virtually. For more on the 2021 Commencement, including a wall of social media posts tagged with #DeSalesU2021 and photos from Baccalaureate, visit DeSales.edu/Commencement.