“You could truly feel the love.” DeSales Exceeds Day of Giving Goal for Third Year in a Row 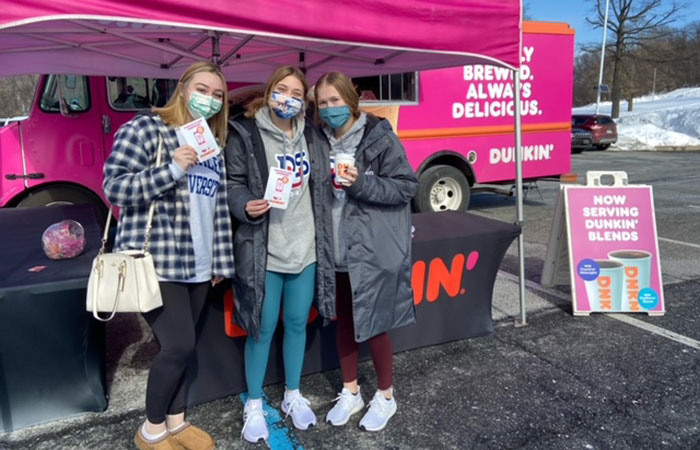 Donors near and far opened their hearts to support DeSales on its third annual Day of Giving.

“I am edified by the generosity of the DeSales community in response to the Hearts on Fire Day of Giving. We are greatly blessed by the friendship and support of so many. On behalf of our students, I thank you and assure you of our vast gratitude. And, I look forward to telling our students of the deep kindness that makes their DeSales education possible.”

The collective, hands-on effort came from every facet of the University—from alumni and employees to students, parents, and friends. The Class of 1969 garnered the most alumni participation, followed by the Class of 2020, and the Class of 2009. Students also stepped up in a big way—giving four percent more than last year.

“You could truly feel the love this year,” says Catherine Logan ’08, director of annual giving. “In a year where so many things are uncertain and so many people are watching every dollar, the fact that they still believe in DeSales and love the University is wonderful.”

The annual giving team started planning for the event back in August knowing that it would need to be virtual. The alumni team also hosted several virtual events leading up to the big day, including Pints with Professors, Athletics Affinity Night, and a live Hearts on Fire Valentine’s Concert featuring more than a dozen alums—which had nearly 250 people either watching on Zoom or engaging on Facebook. Dunkin' Donuts also provided free coffee on campus from their Dunkin' Community Cruiser.

Many supporters also steered their donations to the University’s challenges and competitions. The Division of Performing Arts walked away with a $5,000 reward for having the highest alumni participation percentage. The men’s lacrosse team received $500 for being the athletics team with the most dollars raised, while the men’s basketball team took second place and received $250. The athletics team with the highest alumni participation went to women’s lacrosse, which won $500. The men’s lacrosse team took home $250 with second place.

“I find it really amazing that not only did we hit the challenges, but people kept giving even after a challenge was met,” says Dan Villanti ’09, assistant director of alumni relations. “More and more people wanted to keep giving and get involved.”