The daylong event kicked off on the turf field behind Billera Hall, where athletes, coaches, families, and volunteers gathered for the Opening Ceremonies. Jennifer Peterson, who’s been competing with Special Olympics for 20 years, spoke about her new role as a global messenger and how the organization has helped her to build confidence.

“I wanted to become a global messenger so I can talk to others about Special Olympics, tell them how it changed my life and the life of my family, and so I can hopefully inspire others to become athletes, mentors, coaches, or volunteers. Being in Special Olympics has made me a better person.”

During the ceremonies, Tim Kerrihard of Special Olympics Pennsylvania recognized Sarah Knop ’19 and Hannah Pergolizzi ’19—last year’s event directors—as the Special Olympics organizing committee’s volunteers of the year. He credited the two with helping to bring the Eastern Fall Sectional to DeSales and for creating the first unified events on campus to help promote inclusion.

“Although this is traditionally just a single-person nomination, I can’t separate the work that these two ladies have done together as a team,” Kerrihard said. “They stand out as some of the strongest leaders I have ever had the opportunity to work with. Their willingness to give of themselves for the benefit of others is truly unmatched.”

After the lighting of the flame of hope—which represents the determination of the athletes—the games began. Athletes were put to the test in five events: soccer, volleyball, powerlifting, bocce ball, and cross country running/walking.

Delina Rodrigues, a powerlifter from Carbon County, traveled to Abu Dhabi earlier this year to compete in the World Games. She and an athlete from China were head to head going for the gold, when a text message changed the course of the competition.

“My coach texted my mom on the sidelines and said, ‘your daughter might come in second.’ So I was like, ‘no, I have to get that last lift.’ I got it,” Rodrigues said.

The Eastern Fall Sectional is the University’s largest service event of the year. Hundreds of students—including the entire freshman class—volunteer. For cousins Moses Weaver and Catherine McClain, the event is a family affair.

Weaver served as director of support services, handling everything from food and logistics to security and medical. McClain was one of nearly 100 freshmen to serve as a local program host—guiding a specific county of athletes around campus for the day and cheering them on.

Their uncles—Brother Joe Schodowski, OSFS, and Andrew Schodowski—also volunteered for the big event. Brother Schodowski works for campus environment, while Andrew—who has competed in Special Olympics in the past—can often be seen helping out around campus. 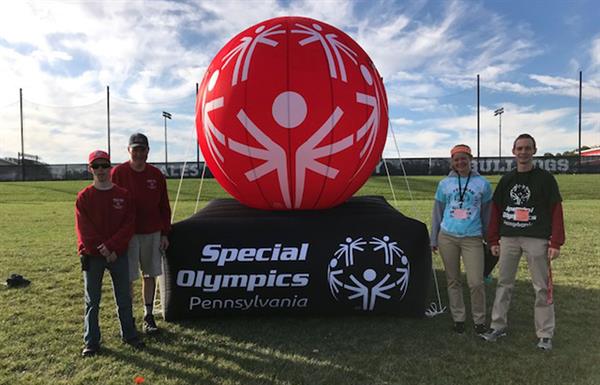