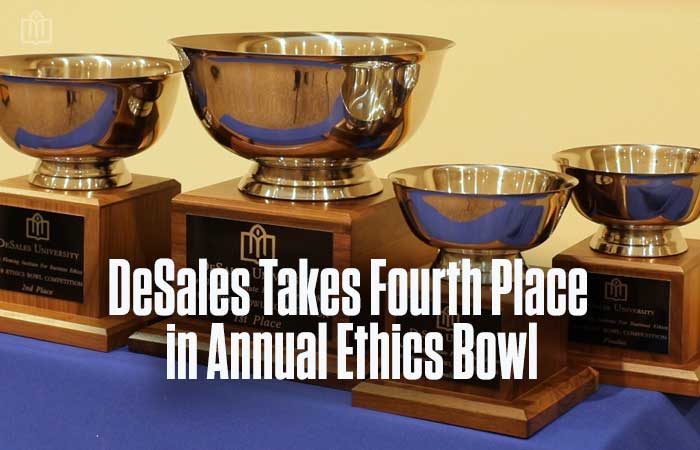 Students from DeSales University took home a trophy and $500 in the 2018 Fleming Institute for Business Ethics competition.

This year's Ethics Bowl pitted 11 teams from various local colleges and universities against each other. Students played the role of a researcher developing a non-invasive detection test for Chronic Traumatic Encephalopathy (CTE), a progressive degenerative brain disease found in athletes with a history of repetitive brain trauma.

Students had to choose between taking a funding cut and delaying their cutting-edge research for two years, or accepting funding from a leading manufacturer of sports-related safety equipment that could delay any findings that hurt its bottom line.

"This is a great opportunity for our personal development, particularly in regards to our potential future business careers," says Ben Cunningham '18, an accounting and supply chain management major at DeSales.

"Having an ethical dilemma where two options are at hand and you don't really know which way to go is something that I'm going to have to deal with in my career," Cunningham says. "And I think having that exposure during my college career, both in classes but also in this competition, is a really great opportunity for me to learn."

All 11 teams presented their plans before a panel of business executives serving as judges. The judges then deliberated and chose four finalists. Those remaining teams were then given a twist related to the case and had a limited amount of time to come up with a response.

Richard Fleming and his family foundation established The Fleming Institute for Business Ethics in 2009 with a goal to promote a culture of ethical awareness and action in business professions through the collaborative efforts of corporate and educational groups. The work of the institute is administered by the DeSales University Division of Business, in collaboration with the Salesian Center for Faith & Culture.