by David Oblas Nov 5, 2018
While it wasn't love at first site for Michael Laroche, he soon grew to cherish DeSales and eventually “fell in love with the place and the people,” he said. 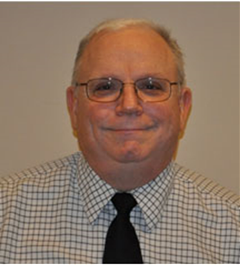 While it wasn't love at first site for Michael Laroche, he soon grew to cherish DeSales and eventually “fell in love with the place and the people,” he said.  As a member of the Class of '75, Laroche shared good times, commiserated over sad times, and helped his fellow classmates on the daily—“it was a great place to help me start my adulthood,” said Laroche.

During his time at DeSales, then known as Allentown College, Laroche was involved in student government, worked in the library, and finally as box office manager for the Theater Company.  During his Sophomore, Junior, and Senior years, he performed in the shows produced and directed for a Senior Theater Project.  His most memorable role was as Schroeder in "You're a Good Man Charlie Brown" my senior year—according to Laroche, “It was all a blast.”

Laroche currently serves as the District Manager of the Stroudsburg, PA Social Security office. He is proud of the success that his company has achieved, where he has helped thousands of people at the most vulnerable times in their lives. Laroche said, “I'd like to think that the vision and values I received and strengthened at AC helped me do a better job over the years.” Additionally, Laroche serves at his home parish of Holy Trinity in Whitehall, Pa, where he serves the liturgy, preaches, and both coordinates and teaches for their RCIA ministry. In 1995, he was ordained by Bishop Welch to the permanent diaconate for the Allentown Diocese.

Laroche spends much of his time at home with his wife of 36 years, Wilhelmina, his son Brendon, who is a priest for the Diocese of Allentown, and his daughter, Veronica, who is a librarian continuing her schooling in library science.  Laroche said that the family enjoys cruising—especially to Alaska, New England and Canada.  His family and he are subscribers to both ACT 1 and the PSF, supporting the DeSales Theatre programs.

“I really would like to credit Allentown College for teaching me how to think.  If I learned nothing else, I learned how to examine a set of facts, make a reasonable argument about the facts, and write a decent paper.”  In ten years Laroche hopes “to be retired, continuing my diaconal ministry, and frequently sitting in a deck chair and sipping a fruity adult beverage.”