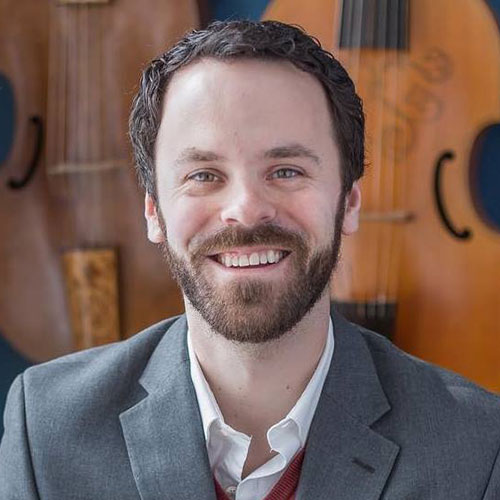 Conductor Ryan Mullaney has made a name for himself in music circles throughout North America. A native of Western Maryland, Ryan currently resides in Pennsylvania's Lehigh Valley serving as Assistant Professor of Fine Arts (Music) at DeSales University where he serves as Director of Choral Activities and Co-Director of the Catholic Liturgical Music Scholars Program. He has previously served on the faculties of the McIntire Department of Music at the University of Virginia, leading the UVA Chamber Singers and University Singers, and at Whitworth University in Spokane, Washington where he led the renowned Whitworth Choir, Men’s Chorus, and taught a senior seminar in choral techniques.

Entering its 10th anniversary season, Mullaney is co-founder and artistic co-director of Mountainside Baroque, an early music collective based in Western Maryland focusing on historically informed performances of music before 1800. During his tenure as a Graduate Teaching Associate at the University of Washington, Mullaney served as associate conductor of the UW Chamber Singers as well as leading the Campus Philharmonia Chamber Orchestra, Men's Glee Club, and the World Voices Ensemble. Additionally, he served in the Music History Department where he taught courses in music history and music in culture. In addition to his University duties, he served as Chief Conductor of the Mercer Island Baroque Orchestra for their 2017-18 season.

Before his departure to the West Coast, Mullaney spent four years as Director of Liturgical Music at Our Lady of the Mountains Catholic Parish in Cumberland, MD, supervising a staff of eight part-time musicians, 50 volunteers, and musical worship at five churches. Prior to this post in Cumberland, Ryan enjoyed a five-year tenure on the music staff at the Cathedral of Mary Our Queen in Baltimore, MD, serving as an assistant choirmaster, cantor, and section leader in the Cathedral Choir. As a graduate conductor in The Boyer College of Music at Temple University, he was named Elaine Brown Scholar in Choral Music. In addition to leading all choral ensembles over a two-year period, Mullaney maintained a professional singing career with the renowned choir of St. Clement’s Church.

Mullaney is active from coast to coast, from his regular work as ensemble coach and adjudicator with choirs in the Seattle Public School District (WA) to his work as clinician with the Hanover (MA) Public School System . He has served on the board of the Allegany Arts Council, Queen City Performing Arts Development and the Liturgical Music Commission for the Archdiocese of Baltimore. His current research interests include topics in 17th century performance practice (including a forthcoming article on Handel’s Dixit Dominus), aesthetic and theological considerations surrounding the Missa pro defunctis, and the musical canon of noted Baltimore composer Robert Twynham.