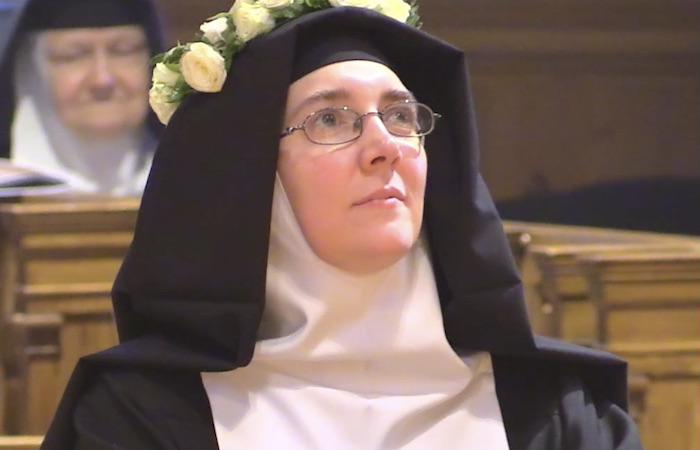 What’s one thing Sister Margaret Joseph Armstrong, VHM ’07, wants people to know about her profession as a nun? “It’s a wedding,” she said.

“I promise to belong 100% to God,” Sr. Margaret Joseph continued. “Every action I take, even the simple sweeping of a hall or picking up of a pen, is a formal act of worship. An act in which God is honored and loved and adored through me, His humble servant.”

On March 19, 2022, Sr. Margaret Joseph made her solemn profession in the Monastery of the Visitation in Tyringham, Massachusetts. This means that she has fully committed herself to a lifetime of belonging to God and carrying out His will.

Sr. Margaret Joseph first felt the call to serve when she was an environmental science and chemistry dual major and theology minor at DeSales. “It was during my freshman year that the Lord first tugged on my heart and asked me to be His bride. I was not ready to let go of my dream to be an entomologist but did some research.”

While studying at DeSales, Sr. Margaret Joseph visited more than 10 religious communities, wrote to religious sisters, and prayed. Post-graduation, she continued to seek His will, serving in Arizona at Maggie's Place, a home for homeless pregnant women, and with the Little Sisters of the Poor, a community dedicated to caring for the impoverished elderly.

Although she admired the sisters and laity who worked at these organizations, she described having felt a deeper calling to spend more time in the chapel. She spent two months as a postulant with a Carmelite Monastery in Wisconsin but returned home to Pittsburgh after determining this was not God’s will either.

“For another almost two years I searched and prayed. Then it happened. The Lord sent me a very clear sign that I could no longer ignore, and I smiled as He led me back to the community where I made my very first retreat—the Monastery of the Visitation.”

The Visitation Sisters are a contemplative order, founded by Saint Francis de Sales and St. Jane de Chantal. It is a cloistered community, meaning the sisters do not leave the property except for medical purposes or essential goods that cannot be delivered.

According to Sr. Margaret Joseph, communities such as theirs remind individuals that the ultimate goal is not to live within our world, but in heaven. Without distractions such as television, the sisters can devote themselves to the quiet contemplation of God’s will, words, and love.

While she did not pursue a career in entomology, Sr. Margaret Joseph satisfies her passion for insects through her work as the monastery’s beekeeper, as well as being the go-to person to relocate unwanted bugs back to their natural habitat.

“What inspired me to pursue a hidden career to bring souls to God instead of the more visible career I was preparing for of studying and researching in the field of entomology?” asked Sr. Margaret Joseph. “Love. I fell in love with God. How could I best share this devotion and spread it to others? Live completely for Him and with Him.”