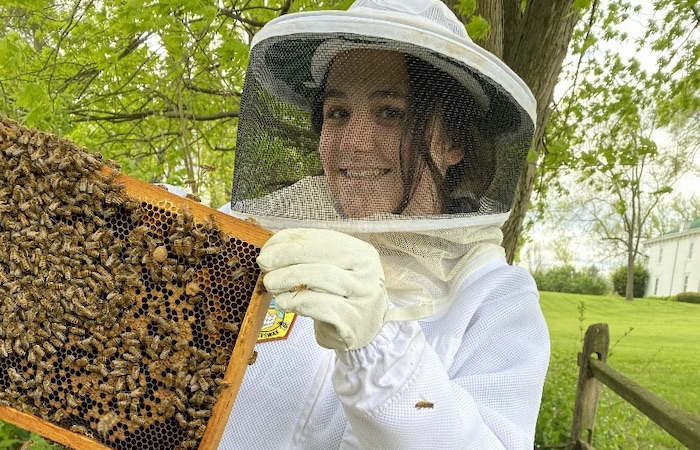 Lucy Winn peers through the veil of her beekeeping suit and lifts the bulky frame off one of several beehives her family owns in rural Carlisle, Pennsylvania.

She carefully inspects the honeycombs, identifying the number of eggs, the appearance of the bees, and whether their movements are normal. Monitoring the health of honeybee colonies is not only fun, but essential to preventing food scarcity.

“One out of three bites of food we eat is dependent on pollination,” says Winn ’24, a business and economics double major. “Eighty percent of the foods that depend on pollination are pollinated by honeybees. Without them, our grocery stores would be very bland because we wouldn’t have nearly the amount of food that we do now.” 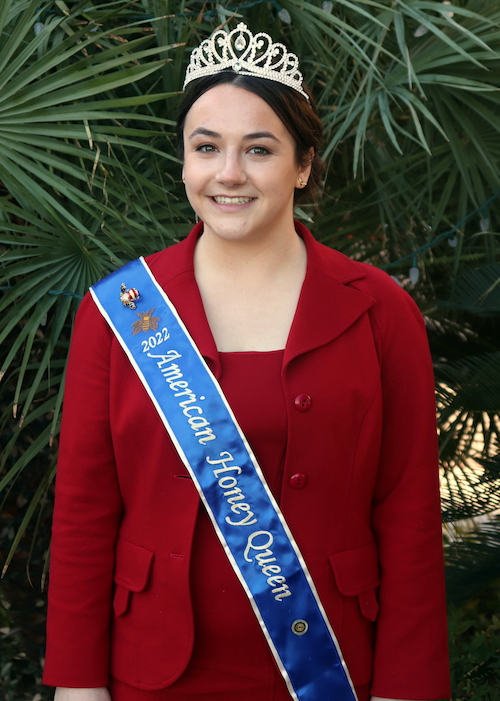 Winn’s passion and advocacy for beekeeping is ultimately what led her to be crowned the 2022 American Honey Queen by the American Beekeeping Federation. She serves as a national spokesperson for the honey and beekeeping industry and even gets to travel the country to talk about the benefits of honeybees.

Winn’s journey toward becoming the American Honey Queen began when she was a teenager. While originally her dad and sister tended to her family’s hives, Winn recalls the exact moment she realized it’s her passion too.

“My brother and I had gone out into the hives, and I was nervous to get in there,” she says. “I remember one of my gloves was ripped, and I was worried bees were going to get into my suit, but they didn’t. The experience was just so peaceful. I had the best time of my life.”

Once Winn’s passion was ignited, she continued keeping bees and earned the title of Pennsylvania Honey Queen in 2020 and 2021. During her two-year reign, she promoted the state beekeeping industry, demonstrating communication skills and industry knowledge, which would ultimately lead her to be crowned American Honey Queen.

Winn credits her DeSales education with helping her excel as a spokesperson.

“The skills I’ve gained in my marketing and business classes have really helped me succeed in the American Honeybee Program. I was originally studying dentistry, but I like to talk to people—I like public speaking.”

Part of Winn’s role as a spokesperson includes educating people on how we can help save bees from extinction. She encourages everyone to support their local beekeeper, buy honey and beeswax products, and plant large patches of native flowers.

For those who are interested in becoming a beekeeper—a hobby Winn describes as fulfilling—she recommends educating oneself, attending classes, and seeking support from local clubs and organizations.

While Winn doesn’t know exactly where her path will lead post-graduation, there is one thing she knows for sure.

“I do have a great passion for beekeeping and I really like the classes and business world, so, if I could combine those two, I would love that."