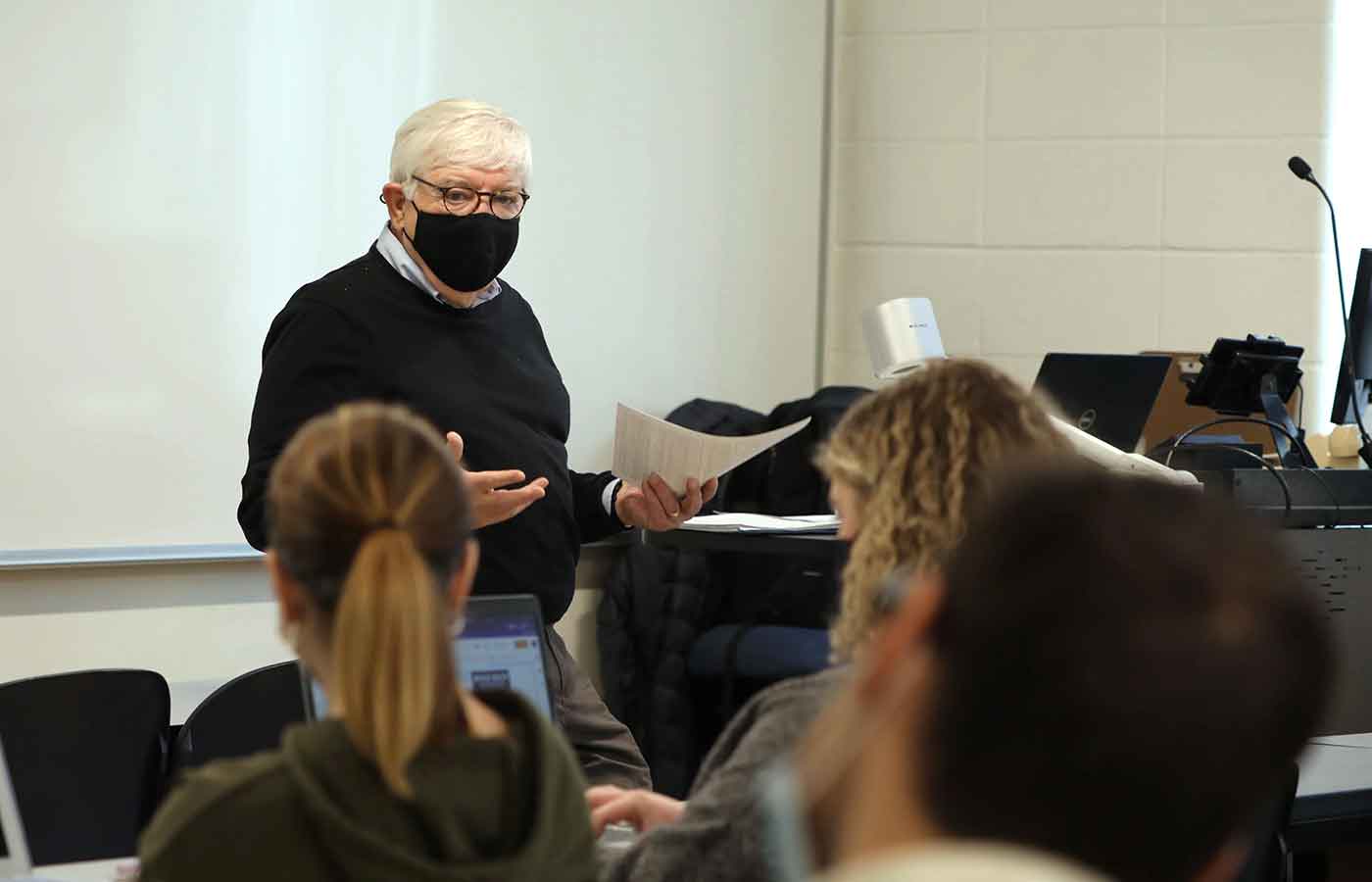 Tom Roberts is the first to admit he’s neither a professor nor an academic.

After devoting five decades to the field of journalism, the former executive editor of National Catholic Reporter had called it a career. Then, a conversation with Father James Greenfield, OSFS ’84, University president, landed Roberts in a campus classroom.

“Father Greenfield and I were talking, and I said, ‘Religion has far more an effect on public conversation and politics than most people give it credit for,” Roberts says. “I said, ‘You ought to have somebody teaching this.’ And he said, ‘Why don’t you teach it here?’”

What Roberts first viewed as a joke ended with him leading the course CM309-Special Topics: Religion in the News in the fall of 2021.

His intent for the class was twofold: diving into some of the bigger issues where religion and politics intersect, and understanding the role that good journalism plays. No topic was too taboo for discussion, including President Biden’s stance on abortion, the Church sex abuse crisis, race and the Church, and conservative criticism of Pope Francis.

“It’s an open discussion,” Roberts says. “I have this long experience in covering these issues. I think they’re vital and there’s a value for young minds to be able to engage in these kinds of discussions.”

“I’m a practicing Catholic interested in how religion intersects with politics and news, especially now with all the hot-button issues,” Carbonetto says. “I was very curious to see how somebody with experience in covering it as a journalist would be able to describe it and educate about it.”

Roberts, who attended DeSales for several years in the 1960s, also wanted his students to engage with experts in the field. He brought in guest speakers via Zoom nearly every week, including Heidi Schlumpf, current executive editor of NCR; John Carr, founder and co-director of the Initiative on Catholic Social Thought and Public Life at Georgetown University; John Allen Jr., editor of Crux, a Catholic news website; and George Weigel, a Catholic theologian and author.

“Weigel and Carr, who probably are polar opposites in terms of politics, agree on one thing: as Catholics, they are homeless politically because neither party embodies the whole ball of wax, especially the social justice teachings,” Roberts says. “So, it’s interesting for students to hear different points of view and this convergence of views at times.”

Roberts grouped students into teams to lead each guest discussion and report on it afterwards. He tapped Faith Collina ’22, a communication major, to interview Jason Berry and Tom Fox. Berry, an investigative reporter, and Fox, NCR's editor/publisher emeritus, first broke the story about child sex abuse within the Church for NCR in 1985.

“It was such an insightful and enlightening experience,” Collina says. “I learned so much about the corruption of the Church, what it means to stay strong in your individual faith, and ultimately what journalism is all about—being a voice for the people and holding systems of power accountable.”

In addition to the special guest speakers, the class also spent a good deal of time studying the work of well-known nuns, including Sister Mary Scullion, president and executive director of Project HOME, which aims to break the cycle of homelessness and poverty, and Sister Jeannine Gramick, who co-founded New Ways Ministry, a Catholic social justice center working for the reconciliation of LGBTQ+ people and the Church.

Roberts’ insistence to cover every facet of the Church—the good, the bad, and the ugly—and to hold religion accountable echoes Fr. John Courtney Murray, the esteemed Jesuit theologian, who said, “… within the Church, as within civil society, the need of the people to know is in principle unlimited.”

“This is essential,” Roberts says, “because religion that stays within the sanctuary becomes a dead religion. I said at the beginning of the course, ‘We’re not going to come up with very many answers, but we are going to come up with questions that I hope you hold and make you think well beyond this class.’”