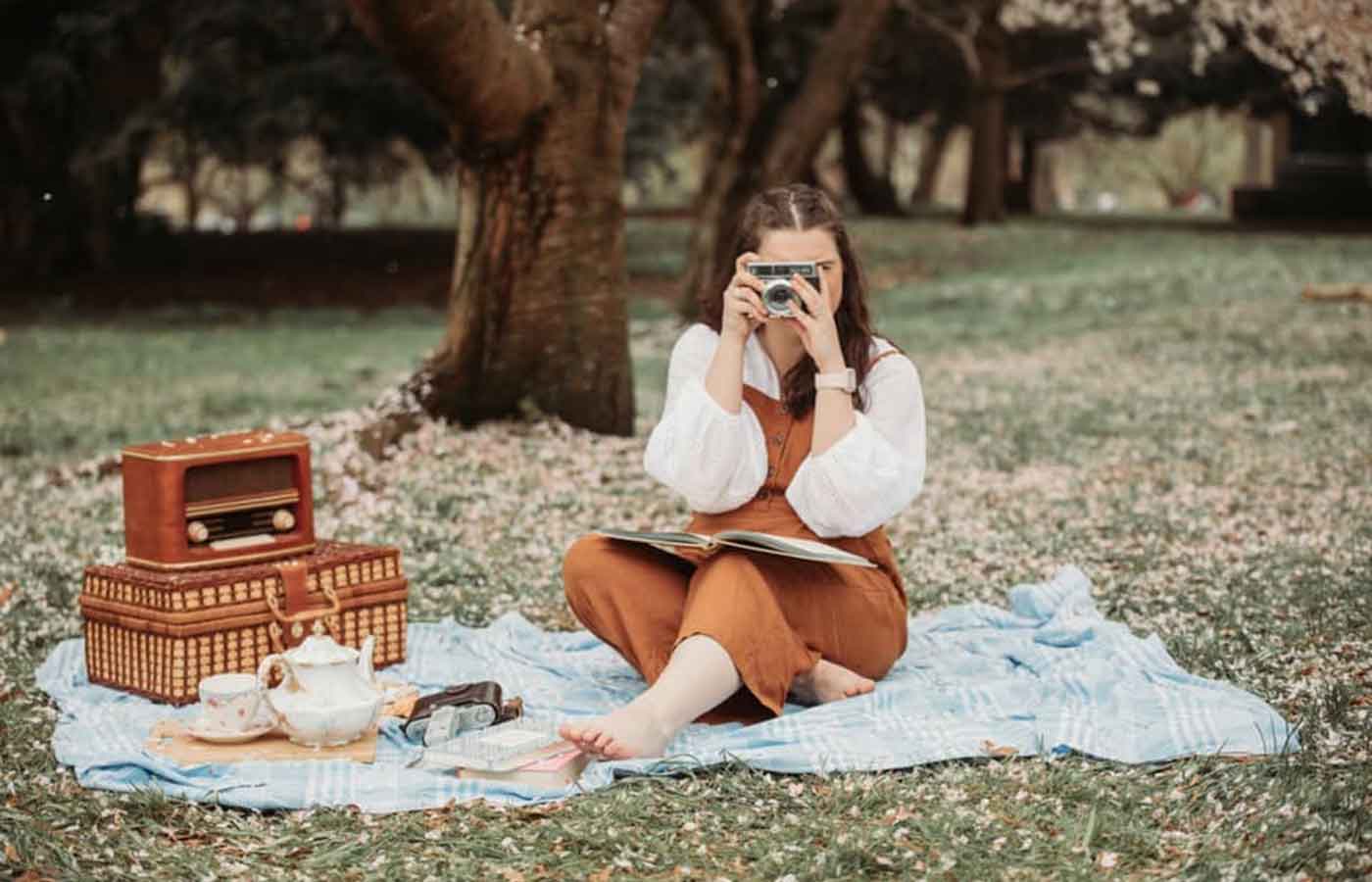 Kailey Edwards ’20 took advantage of her time during the pandemic to expand her interest in photography.

Louis Jannuzzi III ’17 was performing in the first national tour of the musical Bandstand when the pandemic hit. A Lehigh Valley native, Jannuzzi was enthusiastic about the show’s scheduled stop in Easton in March 2020.

What he didn’t know at the time—the Easton stop would mark the final call for the Bandstand tour. A period of great uncertainty followed as public health concerns prevented entertainers like Jannuzzi from taking the stage.

While many in the entertainment industry panicked in response to the pandemic, Jannuzzi and other theatre alumni weren’t deterred. DeSales University performing arts graduates found new and interesting outlets to apply their expertise and creativity during the pandemic.

“Sure, it’s easy to go, ‘Wow, I put all my eggs into the basket of art and performance and live shows or television or film or voiceover, and now it’s gone. What do I do?’” Jannuzzi says.

But from a unique musical production to a photography business, a podcast, and more, DeSales grads weathered one of the toughest situations of our time and grew as artists.

Jannuzzi focused on his strengths and encouraged friends and colleagues to do the same. That optimism paid off.

In May 2020, Jannuzzi was asked to audition live for a production of The Buddy Holly Story at the Rev Theatre Company in Auburn, New York. He booked the role of Niki Sullivan, Holly’s rhythm guitarist. The production went virtual and was recorded for a popular streaming service called Broadway on Demand.

Jannuzzi recalled the cast and crew made an agreement to be smart and keep one another safe during their time together—if one person caught COVID-19, the whole production was at stake.

“I had to go get groceries at some point so I went to the grocery store, I wore gloves, I double masked, I hand sanitized, I wiped all my groceries down,” Jannuzzi says, “because we were all extremely careful to make sure this production happened. And it did, so it paid off.”

The show was even blocked with social distancing in mind: No two actors ever came within six feet of one another, including scenes with Holly and his wife.

Gabe Moses ’21 knows about the technical challenges of putting on shows during the pandemic. Last year, inspired by a friend’s social media post about “gender-bending” plays, he organized a Zoom play reading of 12 Angry Men cast entirely with female DeSales students.

The show was a success, and it turned out that was only the beginning. Moses directed several more virtual readings throughout 2020, including Clybourne Park by Bruce Norris and Shakespeare’s Taming of the Shrew.

There was a host of unusual obstacles to navigate—like how to improvise if a fellow cast member’s Wi-Fi dropped out, or how to handle it if audience members forgot to mute themselves on the livestream. “We were much more advanced toward the end,” Moses says.

Moses also acted in Arden Theatre Company’s production of A Midsummer Night’s Dream, produced as a live-streamed “virtual showcase.” When George Floyd was killed in Minneapolis in May 2020, Moses, who is Black, and his castmates talked through their emotions and examined the appropriateness of rehearsing a comedy at that point in time.

“That was the moment for me when I thought, ‘Wow, look how much current events are impacting this world right now,’” Moses says. “‘Look how much this pandemic is changing us as artists and just how much is being put on the forefront right now.’”

Moses had just gotten into podcasts during the shutdown, and the idea struck him to create his own podcast honoring Black artists, using it as a platform to both entertain and educate others about their lives and accomplishments. He continued the podcast, Black-tor, into 2021 and expanded its format to include interviews with fellow Black performers he knew.

“I had made a map for myself of what artists I wanted to talk about each episode,” Moses says, “and that just changed over time based on how I was feeling in a given moment and what I think the world needed to hear—what I think people in my community needed to hear, as well.”

The pandemic’s onset in March 2020 led to some heart-wrenching cancellations for DeSales students. Kailey Edwards ’20 recalled how, immediately after a run-through, her senior class learned their Act III production of Jungle Book wouldn't stage live performances. “I was in a full monkey costume,” Edwards says. “We’re all sobbing. I’ve got brown makeup running down everywhere.”

Some TV/film majors recorded the run-through, so the show ended up being distributed digitally to a wider audience. Still, Edwards and her cohort graduated and entered a world where live theatre was on pause.

For Edwards, the pandemic was a chance to invest her newfound free time into another interest: photography. And what began with Edwards purchasing a used DSLR camera on Facebook Marketplace and charging $50 per photoshoot gained more momentum than she ever expected.

She went from doing engagement shoots for a friend and her fiancé to working their wedding, too. Social media marketing spread her name and attracted more clients. Every time Edwards thought the work would slow down, it picked up more. Before long, Kailey Edwards Photography was a full-fledged business.

“As a theatre person, I know how to direct people and I know what composition looks like,” says Edwards, who opened a studio in June. “I know what I want the photo or the event to evoke in a person. That’s exactly what theatre is too.”

Whereas Jannuzzi felt his pandemic experience reaffirmed for him that live theatre was where he belonged, Edwards always knew a number of pursuits brought her joy and was happy 2020 set her on her new course.

He found himself working from home in New York’s Upper West Side, where he lives a block and a half from a Trader Joe’s. Health protocols being what they were, a line would form hours before Trader Joe’s opened, and customers would wake up Luker and his husband by incessantly talking on their phones.

He wanted to shout at the shoppers to quiet down, but instead, Luker made a sign. Then another. He’d hang them outside his window, imploring callers to reconsider noisily discussing their grocery purchases or other intimate details of their lives.

Luker admits to having poor penmanship and asked a neighbor’s help to improve each sign’s design. This collaboration resulted in more eye-catching signs and an Instagram account, which has attracted the attention of more than 20,000 followers, including The New York Times. Some of Luker’s actor friends lent a hand by recording an audio component for some posts.

“I got to know my neighbors way more than I ever did before, because New York can be so insular sometimes—you just ignore people in the hallway,” Luker says. “Now we’re all close friends, and it’s the one thing that has joyously come out of this experience for us as neighbors.”

Luker’s advice for young performers mirrored what Jannuzzi, Moses, and Edwards set out for and achieved on their own. “Just spend time being creative with whatever it is,” Luker says. “The work will come.”