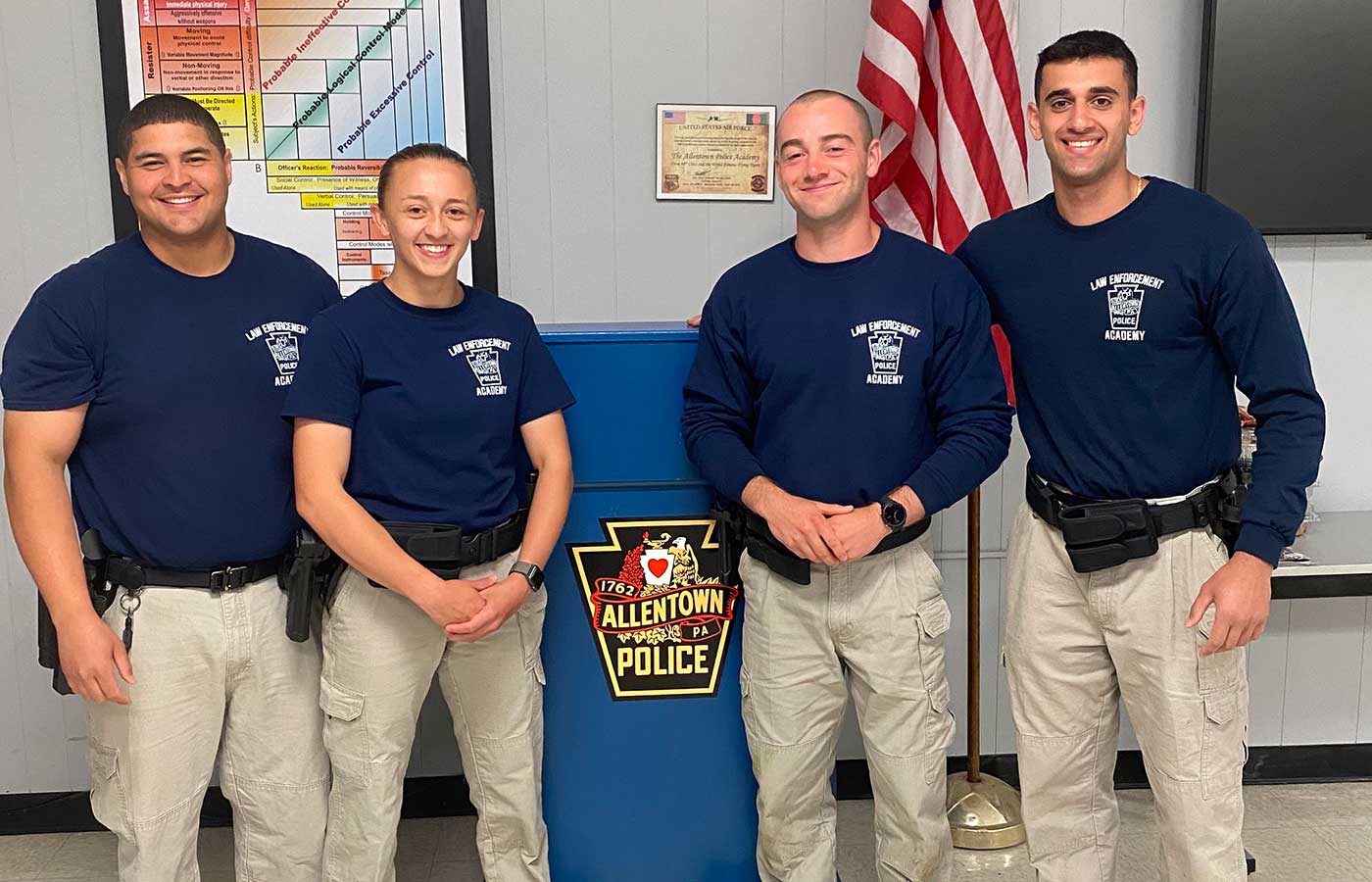 Lyssa Pantella sits inside a patrol car with her partner when they spot another car running a stop sign.

With their lights and sirens activated, Pantella and her partner pull the car over. But they soon realize this isn’t your typical traffic stop. The two men inside the car turn out to be suspected drug dealers.

This is just one of the countless real-life scenarios Pantella ’21 and her fellow cadets practice during Act 120 training at the Allentown Police Academy.

The criminal justice major and three other DeSales students (pictured above left to right: Reynaldo Nunez ’21, Pantella, Joseph McKeon ’21, and Nabil Hazim ’21) are part of the Act 120 program—a unique partnership between the University and the academy that allows qualified students to gain certification to become a municipal police officer in Pennsylvania before graduation.

“It’s an amazing opportunity. If you want to be a police officer and you’re going to college, this is something you should be looking for in a school.”

Pantella’s passion for policing began her freshman year of high school. Nearly everything about the profession excites her, from the physical training—which can be grueling at times—to meeting people she’d never expect to encounter.

“I knew this is where I was going, and I’ve been pushing for it since,” she says. “I want to protect and serve the community in a way that a lot of people aren’t willing to do.”

Like the police beat, Pantella says each day at the academy is different. During academic days, cadets are mainly in the classroom with some physical training mixed in. Practical days are much more interactive, with cadets focused on everything from firearms training and defensive tactics to learning how to operate police cars and initiate traffic stops.

DeSales first joined forces with the academy on the Act 120 program back in 2016. Pantella is the program’s first female participant, and Allentown Police Chief Glenn Granitz Jr. calls her presence a very welcome addition.

“Our biggest need of diversity as the third largest city in Pennsylvania has been to hire female officers,” Granitz says. “They have a unique ability to relate in many given situations on the street and in investigations.”

The program is one of the main reasons why Pantella chose DeSales. Qualified students can attend the academy during the spring semester of their senior year, allowing them to apply for a job immediately after graduation and cutting down the hiring process by months, sometimes even years.

Tuition for the academy is also included in students’ regular spring tuition. The academy reserves a limited number of spots for DeSales students, but entry into the program isn’t guaranteed.

“You have to make sure that you can get into the required courses at DeSales,” says Pantella. “If you don’t plan far enough ahead and look into all your options, and if you’re not able to put extra work in, you can’t go into this program.”

Granitz also acknowledges the rigors of the training, saying cadets must be eager to learn and in top physical shape. He says DeSales cadets have proven to be well prepared over the years and continue to make a name for themselves.

“Having that groundwork with the various social sciences and the humanities certainly enables them to be good cadets and likely better police officers for it,” he says. “It’s a really nice testament to having that DeSales education.”