A Race Unlike Any Other: Dr. Eugene Decker Organizes His Own Neighborhood Half to Help Blood Cancer Patients 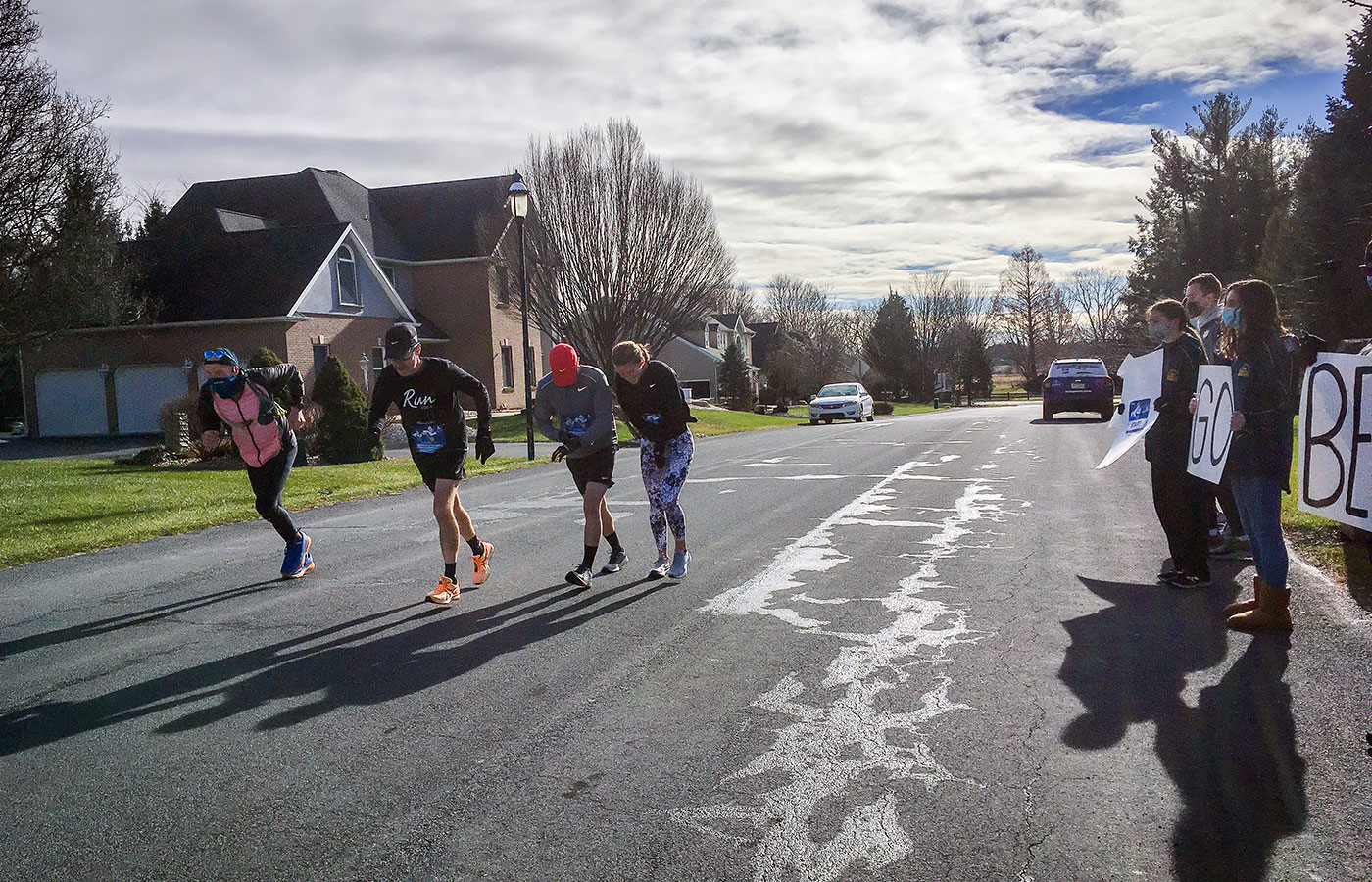 The crowd came out early on a crisp winter day. Nearly 50 friends and neighbors lined Dr. Eugene Decker’s street—holding homemade signs and ringing cowbells in between their cheers.

Normally, Decker and his family would be flying to Florida this time of year. The self-professed Disney nut never misses a chance to compete in the Walt Disney World Half Marathon as part of the Leukemia and Lymphoma Society’s (LLS) Team in Training.

“It’s such a big event,” says Decker, medical director for the Physician Assistant (PA) program, who races and raises money for his patients annually. “Last year we went and there were 21,000 runners. There are probably just as many bystanders, so you really have an audience of 50,000 people when they start that run.”

But this year, there would be no throng of thousands converging on the starting line. The COVID-19 pandemic forced Disney to cancel the popular race, and in its place, Team in Training proposed a virtual run. But the idea didn’t sit well with Decker, who together with his sons, Dylan and Eric, daughters-in-law, Stephanie and Alyssa, and wife, Debbie, make up Team Decker.

“When you think of a virtual run, it doesn’t have that same camaraderie, that same excitement. I thought about not doing it, and six weeks before, my son Dylan said, ‘We’re still going to do it; we still have the cause.’ All I needed was that kick from my son.”

After getting that much-needed push, Decker’s mind began racing. He came up with the idea for a Neighborhood Half Marathon while out for a run. With just weeks to go, he reached out to friends, neighbors, and the cross-country team he coaches for support. They did not disappoint.

“The Neighborhood Half did not surprise me at all,” says Eric Decker, a 2011 DeSales graduate. “I knew my dad would find a way to honor his commitment to running the half marathon no matter where and when it took place.”

Only Decker, Dylan, and Stephanie were able to take part in the Neighborhood Half. But dozens of supporters cheered them on as they crossed a makeshift finish line. A reporter from Service Electric even came out to cover the run.

For the past five years, Team Decker has raced to raise money for LLS—a cause near and dear to Decker’s heart. In addition to the annual half marathon, the team also organizes a 5K and restaurant nights. Last year, it even started a golf tournament. For Decker, all of that hard work and determination comes down to one thing—helping his patients.

“In my 33 years as a physician, I’ve diagnosed many patients with blood cancers,” he says. “When you diagnose them, normally you refer them off to an oncologist. But they always come back to you for the rest of their medical care, and there have just been very special people over the years.”

Decker dubs those patients part of his special honor list. To date, there have been more than 100 and counting—many of whom he has forged friendships with. Crystallizing his commitment even more—the fact that all of the money the team raises goes to blood cancer patients right here in the Lehigh Valley, helping with everything from medical bills and transportation to emotional support services.

“It is a rewarding experience,” says Eric Decker. “Being a part of a team that raises money for such a worthy cause is a wonderful thing. It has been really cool to see so many people come together at our various fundraising events, all for the same purpose of helping others.”

Decker plans to return to Florida for the next Walt Disney World Half Marathon. Despite his love of Disney, he says that the Neighborhood Half will go down as his favorite race. Those 13.1 miles, with familiar faces cheering him on, gave him time to reflect on the real meaning of his mission.

“I think that’s why it was more of an emotional event for me,” he says. “It was a lot of time by myself to think. When I look back, this Neighborhood Half Marathon was a once-in-a-lifetime event. It was so different than anything else we’ve ever done before. I don’t think anything will ever compare.”