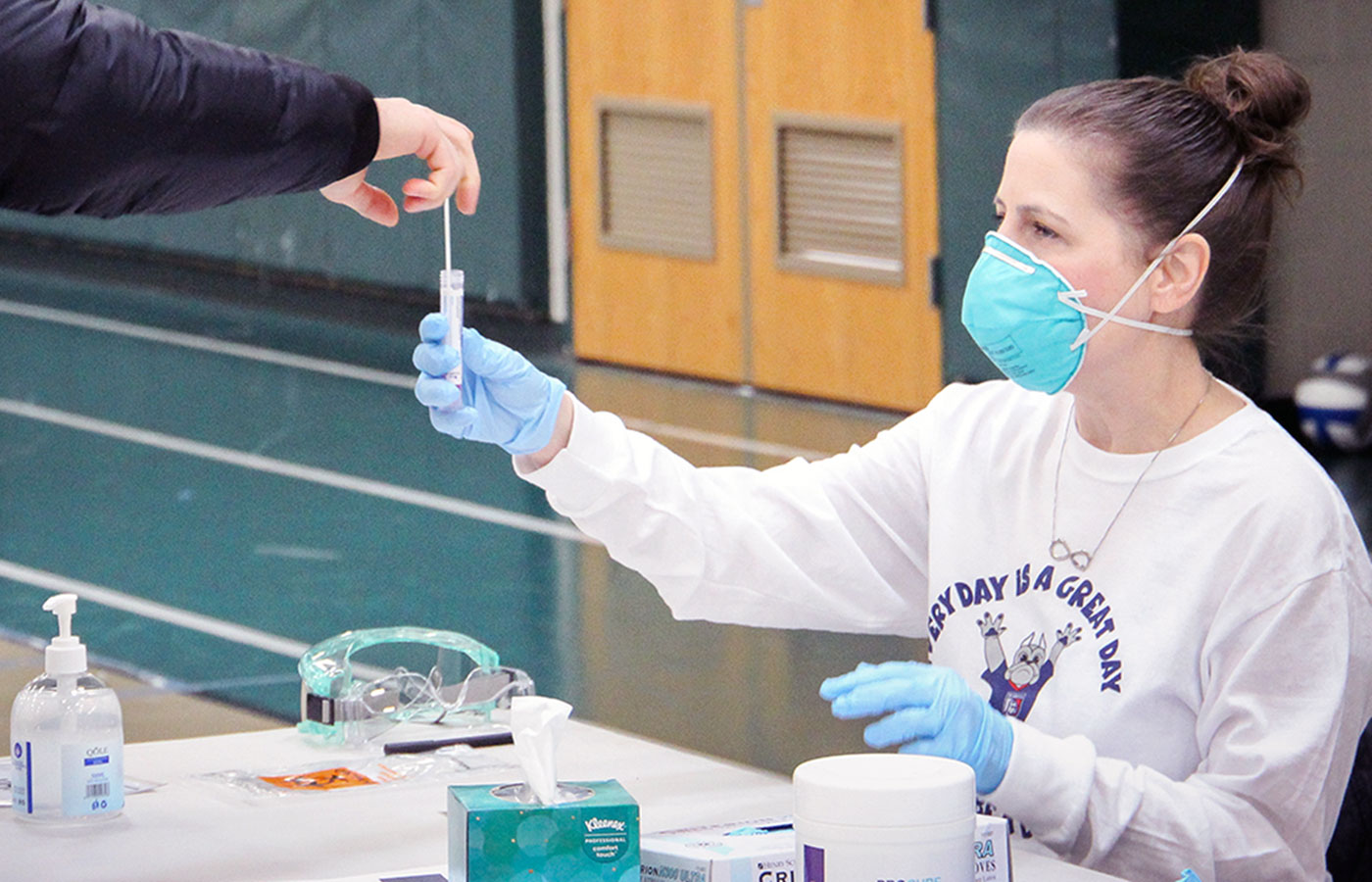 “[The testing] is a little bit uncomfortable but a lot easier than it sounds. I think the campus is doing the right thing. It’s a little safer than before.”

Staff volunteers actually showed students how to swab themselves. Volunteers then collected the samples, which were picked up and tested by St. Luke’s Hospital, with results guaranteed in less than 24 hours.

“We knew it was going to be a big undertaking, and we knew we had to be creative,” said Dr. Gerard Joyce, executive vice president. “But we know more now than we did in the fall. Based on what we’ve learned, we wanted to take a more proactive approach, rather than waiting for someone to be symptomatic.”

Commuters were swabbed and tested just once, while resident students were tested twice—once through St. Luke’s and again using one of the University’s five rapid result testing machines, which provides results in just 15 minutes.

“Because of the lag time, we didn’t want to put students in rooms together without having some sense of whether they were asymptomatic and positive,” said Joyce. “The double testing will mitigate the number of students we’d need to quarantine.”

DeSales will also conduct surveillance testing throughout the spring semester, randomly selecting 10 percent of the full-time population each week. Additionally, anyone associated with the men’s and women’s basketball teams—including players and coaches—will be tested three times per week through St. Luke’s beginning the week before competition. Results will be provided within 24 hours.

Spring sports teams will undergo the same rigorous testing schedule if they have competitive seasons. Any student who chooses not to be tested will be prohibited from returning to campus for in-class instruction.

“They can be part of the virtual community, but they risk leaving the physical community if they refuse testing,” said Joyce. “The whole point of this process is to mitigate the spread. We have to have tools in place to do that.”

In addition to the new testing guidelines, the University community must still maintain social distancing, wear masks, monitor for symptoms, and refrain from gathering in large groups. Students were also asked to complete isolation and quarantine plans before their arrival on campus.

The University will again provide a limited number of isolation spaces on campus and quarantine spaces at a nearby hotel for students who do not live within driving distance of the University or who are unable to return home.

DeSales will also continue to comply with the guidelines for the Center for Disease Control (CDC), the Pennsylvania Department of Education (PDE) Preliminary Guidance for Resuming In-Person Instruction at Postsecondary Education Institutions and Adult Education Programs, and the Johns Hopkins COVID-19 Planning Guide and Self-Assessment.