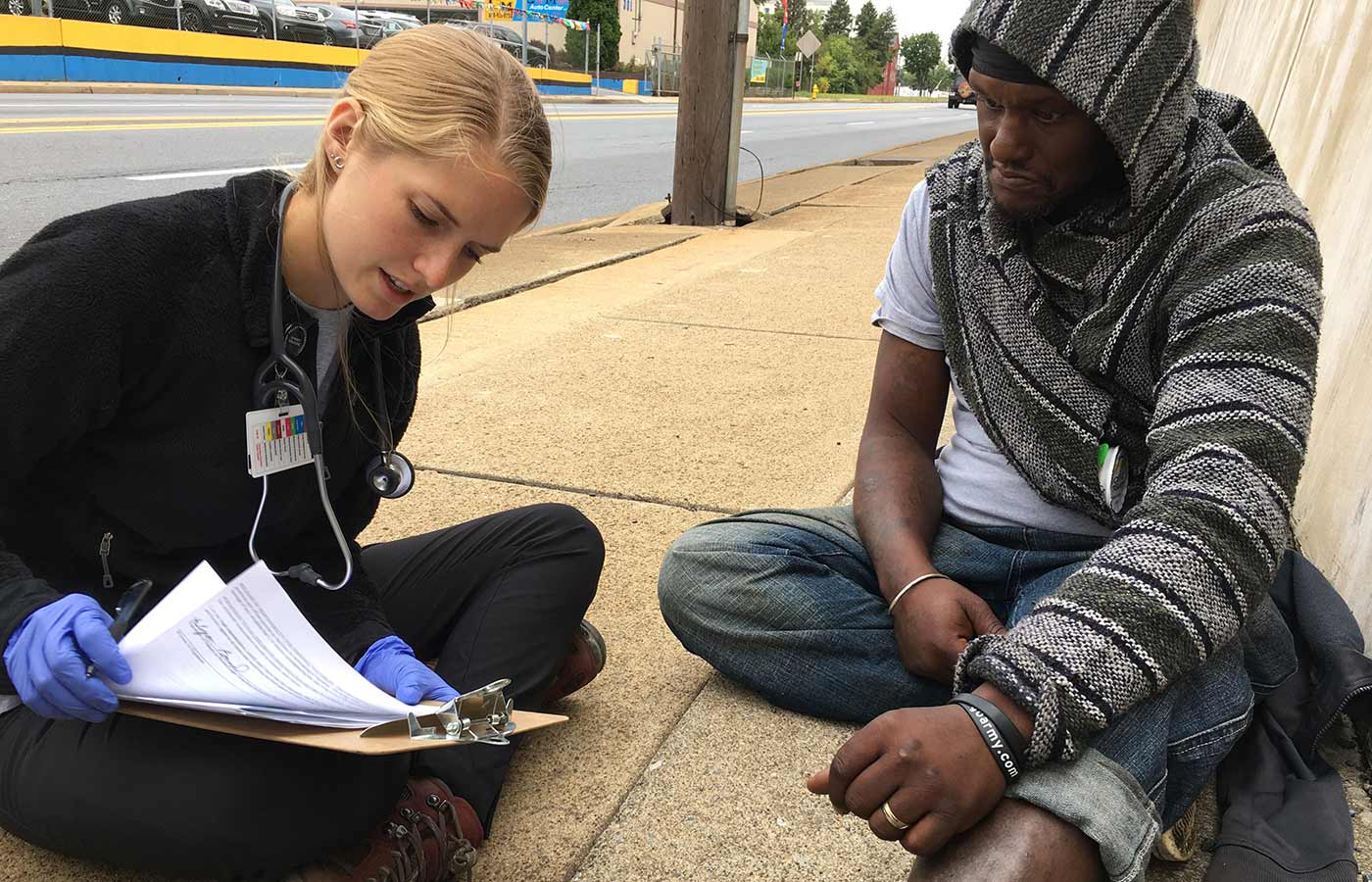 To say that Korrinne Yurick was destined for DeSales isn’t exactly an overstatement. The second-year physician assistant student developed a deep connection to the University while she was still an undergrad at Muhlenberg College.

Yurick was originally on the pre-med track. While searching for opportunities to serve in the Allentown area, a fellow med student suggested she contact Brett Feldman M’07, founder of the DeSales Free Clinic and Lehigh Valley Health Network’s Street Medicine program.

The two met and Feldman introduced Yurick to the PA profession—a move that would end up altering the course of her career.

“I had no idea what a PA was. He explained to me that as a PA, we often are the ones who are able to do more of the underserved work and have relationships with patients. Those are two of my biggest reasons for wanting to be in the medical field. So I realized maybe PA is actually the way to go.”

Yurick’s passion for service work is rooted in her deep, unflinching faith. In high school, she began traveling to Costa Rica with her church to help those less fortunate. Not only did those life-changing experiences bring her joy, they helped to cement her future in health care. They also opened her eyes to the needs of her local community and to making an impact in her own backyard.

“You don’t have to go to another country to engage in that type of work; there’s suffering right around the corner. I think that we have a duty to serve the underserved in our local communities.”

During her sophomore year in college, she did just that—volunteering with Feldman and the Street Medicine team. She also put in countless hours with Feldman’s wife, Corrine, a former faculty member at DeSales, at the DeSales Free Clinic. Feldman says he knew within minutes of meeting Yurick that there was something special about her.

“It’s not typical that we would allow undergraduates to join our team; there was something different about her,” he says. “There was a richness to her character and her passion for service was palpable.”

Yurick volunteered with Feldman nearly every week for four years, putting in more time over the summers and on breaks. Though she connected with many patients, one story sticks out most in Feldman’s mind.

It was almost wintertime and an elderly couple that had been living under a bridge wanted to come stay at the shelter. The only problem—the man had lice and couldn’t stay until every last nit was gone.

Without hesitation, Yurick stepped up to help the couple. For five days, she met them to shampoo the man’s head and pick out the nits one at a time, so that the couple would have a warm bed for the winter.

“That was the second I knew I had to have Korrinne work with us forever,” Feldman says. “I don’t think a lot of people would be willing to do that. If there’s one quality that we look for in Street Medicine, it’s a radical humility.”

With her penchant for service, DeSales’ PA program was a natural fit. The school’s Salesian values coupled with its community outreach provided the perfect setting for Yurick to continue pursuing her passion.

“I really wanted to come to DeSales because of its emphasis on serving the underserved and its mission to make that part of the PA education,” she says. “It was my first choice school.”

In addition to being a full-time PA student, Yurick also splits her time between the Street Medicine Institute (SMI) Student Coalition and the student board of the DeSales Free Clinic.

Last year, she was elected chief coordinator of the SMI Student Coalition, which aims to unite students to share best practices and ideas. In that role, Yurick oversees a variety of projects to connect all of the student-run Street Medicine programs and free clinics across the country.

She also works on ways to advocate for patients through social media and serves as the liaison between the student board and SMI’s board of directors, which Feldman just so happens to be on.

As co-president of the student board of the DeSales Free Clinic, Yurick works to improve continuity of care. She also helps to orient new students coming into the clinic and raises awareness and funds for projects supporting the clinic.

While Yurick admits that the extra work can be overwhelming, she feels privileged to have the opportunity to learn and serve. After she graduates from the PA program later this year, she can see herself working for Street Medicine or doing similar work in another country. She’s open to where the Lord leads her, but she’s adamant about one thing—the work she does is a gift.

“I don’t think it’s about the great work that I’ve done, but more what God is doing through me. I feel like I’m a vessel for this work, and I am so thankful to be able to do it.”