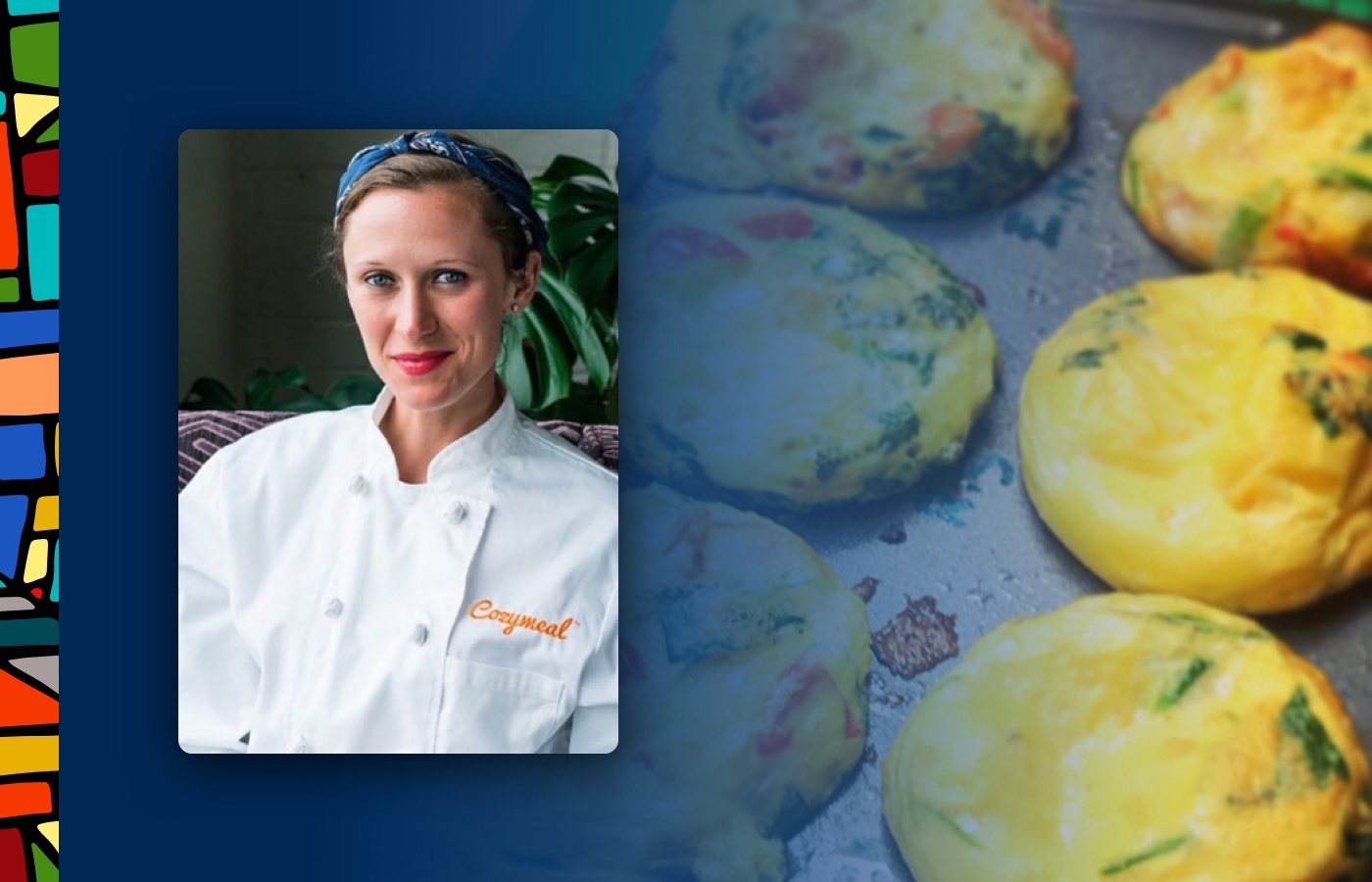 Eliza Martin is the first to admit she isn’t your typical chef. Instead of hoarding secret recipes, the Chopped champion prefers to share them with the world and now with DeSales students who are stuck at home amid the Coronavirus crisis.

Martin, a 2011 graduate, has partnered with the student life department for Eliza’s LIVE Cooking Extravaganza. Every Wednesday evening in April, she’ll take over DeSales’ Instagram Live for a live cooking class.

“The goal is to get kids and adults comfy in the kitchen,” she says. “It’s going to be for varied audiences since I know that a lot of people feel a little bit fearful when they approach the kitchen.”

Each class will run between 40 and 50 minutes. The first—on April 8—focused on making mac n cheese from scratch, and the second will teach students how to whip up a classic bulldog brunch complete with a frittata and roasted sweet potatoes.

A complete grocery list will be posted to Instagram each week, though Martin will mainly use popular pantry items that most students will have at home. She’ll also share some tips and tricks of the trade, including knife skills, and she encourages students to set up their own Zoom meetings to cook virtually with one another.

The idea for the partnership came from Nick Luchko, assistant dean of students for student engagement and leadership. After watching Martin teach a live class on her own Instagram, he reached out and she jumped at the chance to reconnect.

“It’s pretty cool to have an alum come back and help out in a time of need,” says Luchko. “It gives the students an opportunity to see their friends and to come together and have some kind of normalcy.”

Martin freely admits she is not tech savvy. But once California put its shelter in place mandate into effect, she quickly learned how to navigate Instagram Live, Zoom, and other virtual platforms in an effort to stay connected.

“I literally just started doing my own livestream on my Instagram because I felt like I needed to help in some way. I can feel how trying and difficult this time is for everybody, particularly the youth who are at home and don’t necessarily have a way to have some sort of creative or nutritious outlet.”

Martin’s mantra—Feed who you are, and feed that well—is a spin off of the popular St. Francis de Sales quote that is engrained in every student who walks on campus. They’re words she takes to heart each and every day as head chef and director of education at Culinary Artistas—a children’s culinary school in San Francisco.

Martin develops nearly all of the recipes and acts as the liaison between her school and others. Before the current pandemic hit, Culinary Artistas partnered with 12 neighboring schools, running after-school programming for more than 100 children a week. Each week, students learn a new recipe, which they make themselves from start to finish.

“It’s an amazing reward in and of itself,” she says. “Some of these kids have better knife skills than some of the adults I teach. I’m certain that this is ultimately going to make a change for them down the road; they’re going to walk into a kitchen and be comfortable.”

Martin’s moment of change came when she studied abroad through DeSales’ program in London. That was the first time the theatre and communications major had ever really cooked for herself. When she returned back to campus, she began interning at The Rachel Ray Show in New York City.

After graduation, she moved to the Big Apple to pursue theatre. While working as a bartender, she found herself sneaking into the kitchen whenever she could. That’s when she decided to try culinary school.

“It totally changed the direction of my life. I’ve done some weird stuff but at the core of all of it is really just the belief that food is the language of love. What I do starts with love and that was something that was really instilled in me at DeSales.”

Martin’s culinary career took her from New York to Chicago and eventually California. She’s worked in every level of restaurant and in a variety of cuisines, from Indian to Italian to Creole. That know-how and experience came in handy when she found herself facing off against other chefs on the Food Network show Chopped. Martin was eventually crowned champion and took home a $10,000 prize.

In addition to her role at Culinary Artistas, Martin is also in the process of launching her own public speaking business. Her ultimate goal is to visit schools and colleges to teach students about the benefits of cooking and to inspire them to roll up their sleeves.

She feels a particular kinship with college students, since that’s when she learned to cook. For her, making a meal isn’t just about food. It’s a gateway to independence and empowerment—one that she’s determined to share.

“One of the biggest things that changed my adult life was being able to feed myself. As a chef and a food educator, it is my very clear job that I need to pass this on. If we don’t share it, we disservice our community.”