by Tina Slak, Director of Marketing and Public Relations at the Pennsylvania Shakespeare Festival Jul 3, 2019 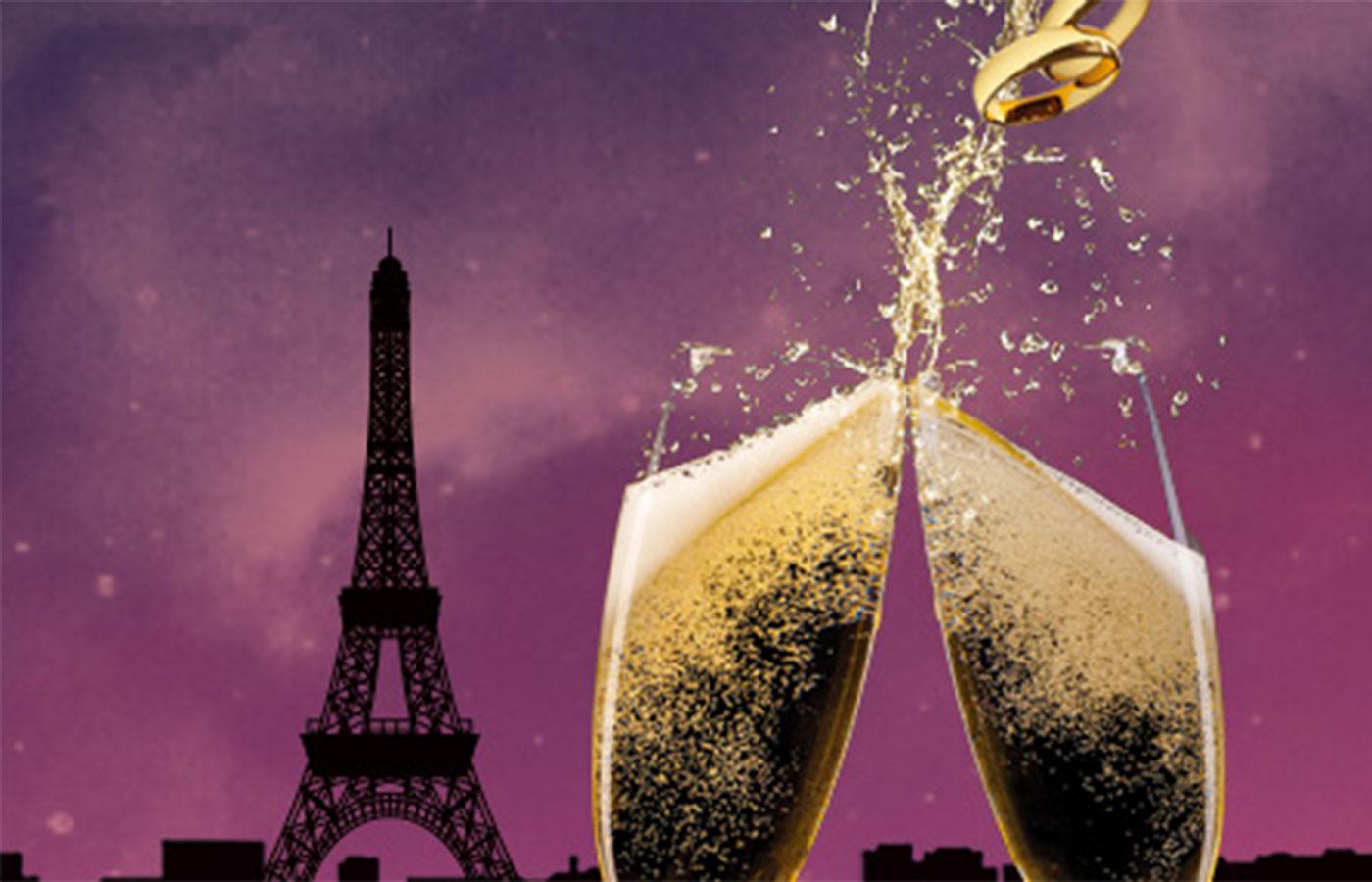 Lauded as “two hours of comic bliss” by The Telegraph, Private Lives previews July 18 and July 19, and opens on Saturday, July 20 through August 4 on the Main Stage at the Labuda Center for the Performing Arts on the Center Valley campus of DeSales University.

After a volatile marriage of volcanic proportions, Amanda and Elyot have divorced and are each newly married. Chance has brought the two couples to adjacent honeymoon suites with adjoining balconies where the fires of former fervor prove irresistible. With the comedic weaponry of Coward’s lightning cleverness and razor-sharp wit, sparks fly as the couple renews their tempestuous relationship. They fight to maintain effervescent decorum against the force of fiercer passions, but their self-restraint is no match for the kind of relationship one cannot live with or without.

“The play’s premise is absurd to say the least,” says Director Dennis Razze. “Even less plausible is their sudden decision to immediately flee to Paris, leaving their current spouses behind without even an explanation.  It is supremely ridiculous, but it makes for delicious comedy.”

Coward’s scintillating satire will be helmed by Razze, who directed last summer’s critically acclaimed production of Ragtime, PSF’s sold-out production of Evita (2017), the critically acclaimed production of West Side Story (2016), and the Festival’s memorable Les Misérables (2015). Razze, who has directed every musical PSF has produced, returns to the director’s chair for his first non-musical since Cyrano de Bergerac in 2008. This year he celebrated his 35th year as a faculty member of the DeSales University Theatre Department.

“PSF has cast captivating, witty actors as the two couples,” Razze reflects. Playing the roles of the tempestuous couple are Matthew Floyd Miller as Elyot Chase and Eleanor Handley as Amanda Prynne. Miller, who has performed in New York at Broadway’s Lincoln Center and Circle in the Square, makes his PSF debut. Handley, whose PSF credits include Twelfth Night, Blithe Spirit, The Taming of the Shrew and many more, has performed at Broadway’s Lincoln Center, and regionally at Hudson Valley Shakespeare Festival and Bristol Riverside Theatre.

Playing the roles of Amanda and Elyot’s new, sensible spouses are Tally Gale as Sybil Chase and Luigi Sottile as Victor Prynne. Gale’s regional theatre credits include performances at The Old Globe, Steppenwolf and Oldcastle theatres. Sottile, who played the title role in last season’s highly lauded Shakespeare in Love, has performed in PSF’s Troilus and Cressida (2017) and The Two Gentlemen of Verona (2014), and regionally at Steppenwolf, Chicago Shakespeare, Folger Theatre, Utah Shakespeare, and Walnut Street Theatre.

“Both the set and the costume designs for Private Lives must be as elegant and sophisticated as the characters, and the designers, Roman Tatarowicz and Sarah Cubbage, have come up with a wonderful art deco environment and exceptionally beautiful gowns and formal attire that should certainly create the desired effervescence of the play,” says Razze.

Private Lives runs in repertory with Shakespeare’s Antony and Cleopatra through August 4 on the Main Stage at the Labuda Center for the Performing Arts on the Center Valley campus of DeSales University.

Subscription packages and single tickets can be purchased online at www.pashakespeare.org or by calling the PSF box office at 610.282.WILL [9455].

The Production Sponsor for Private Lives is Amy Miller Cohen, Ph.D., and the Production Co-sponsors are Susan Henry Martin and James T. Martin; and Keith and Stefanie Wexler.

The professional theatre company at DeSales University, PSF features acclaimed actors from Broadway, television, and film, winners and nominees of the Tony, Obie, Drama Desk, and other major theatre awards, from New York, Philadelphia, Los Angeles, and around the country.

Pennsylvania Shakespeare Festival, under the leadership of Producing Artistic Director Patrick Mulcahy, is the only professional Equity theatre of its scope and scale within a 50-mile radius. PSF is one of only a handful of theatres on the continent producing Shakespeare, musicals, classics, and contemporary plays, all of which can all be seen in rep and in multiple spaces within a few visits in a single summer season. Similarly, PSF was among just a handful of theatres on the continent this summer to produce three Shakespeare plays in a single summer season.  A patron would have to travel seven to nine hours from PSF to find a comparable range of offerings at a single theatre within a few weeks’ time.

The Festival’s award-winning company of many world-class artists includes Broadway, film, and television veterans, and winners and nominees of the Tony, Emmy, Obie, Outer Critics Circle, Drama Desk, Jefferson, Hayes, Lortel, and Barrymore awards. A leading Shakespeare theatre with a national reputation for excellence, PSF has received coverage in The Washington Post, NPR, American Theatre Magazine, Playbill.com, The Philadelphia Inquirer, and in recent seasons The New York Times has identified PSF as one of the leading summer theatre festivals in the nation. “A world-class theater experience on a par with the top Bard fests,” is how one New York Drama Desk reviewer characterized PSF.

Founded in 1992 and the Official Shakespeare Festival of the Commonwealth of Pennsylvania, PSF’s mission is to enrich, inspire, engage, and entertain the widest possible audience through first-rate productions of classical and contemporary plays, with a core commitment to Shakespeare and other master dramatists, and through an array of education and mentorship programs. A not-for-profit theatre, PSF receives significant support from its host, DeSales University, from the Pennsylvania Council on the Arts, and the National Endowment for the Arts. With 150 performances of seven productions, the Festival attracts patrons each summer from 30+ states. In 27 years, PSF has offered 168 total productions (72 Shakespeare), and entertained 900,000+ patrons from 50 states, now averaging 34,000-40,000 in attendance each summer season, plus another 13,000 students each year through its WillPower Tour. PSF is a multi-year recipient of awards from the National Endowment for the Arts: Shakespeare in American Communities, and is a constituent of Theatre Communications Group, the Greater Philadelphia Cultural Alliance, and the Shakespeare Theatre Association. In 2013, leaders of the world’s premier Shakespeare theatres gathered at PSF as the Festival hosted the international STA Conference.

The Festival’s vision is for world-class work.

Patrick Mulcahy (Producing Artistic Director) Since assuming leadership in 2003, Mulcahy has led PSF’s surge in artistic excellence, financial stability, and national recognition. Accomplishments include first-ever grants from the National Endowment for the Arts, attracting a multitude of award-winning artists including winners and nominees of the Tony, Obie, Drama Desk, Outer Critics Circle, Barrymore, and Emmy awards, a doubling of annual attendance, a successful campaign to double the Festival’s endowment, and the expansion of the number of Actors’ Equity contracts per season. He led the strategic planning process that led to PSF’s Vision 2030, a commitment to world-class professional theatre, and coverage in The New York Times, The Philadelphia Inquirer, and The Washington Post. As a professional director, actor, and fight director, credits include Broadway, Off-Broadway, regional theatre, television and radio. Mr. Mulcahy has acted with many industry luminaries including Don Cheadle, Angela Bassett, Cynthia Nixon, and Tony Shaloub at the New York Shakespeare Festival, The Roundabout Theatre, Hartford Stage, Great Lakes Theatre Festival, and the Walnut Street Theatre.  He served as fight director for A Few Good Men on Broadway, and multiple Off-Broadway productions starring Marcia Gay Harden, John Mahoney, Patrick Dempsey, and John Savage.  He directed Oscar nominee Vera Farmiga in The Real Thing, and, for PSF, directed The Winter’s Tale, Henry IV, Part 1, The Tempest, Antony and Cleopatra, Hamlet, Macbeth, Julius Caesar, and Shakespeare in Love. Also Head of Acting at DeSales, Patrick holds degrees in acting and directing from Syracuse University.

Dennis Razze (Director, Private Lives; PSF Associate Artistic Director) Mr. Razze directed last summer’s critically acclaimed production of Ragtime. In 2017 he directed PSF’s sold-out production of Evita starring Broadway luminaries Dee Roscioli and Tony Award-winning actor Paulo Szot. He also directed PSF’s critically acclaimed production of West Side Story in 2016 and the Festival’s memorable Les Misérables in 2015. Including these three blockbuster musicals, Mr. Razze has directed many of PSF’s highest attended productions—The Taming of the Shrew (1998), Fiddler on the Roof, Twelfth Night (2000), My Fair Lady, South Pacific, 1776, and Man of La Mancha. In 2017 he was awarded the Allentown Arts Ovation Award for Performing Arts. This year he celebrated his 35th year as a faculty member of the DeSales Theatre Department. He has directed more than 60 productions for DeSales’ Act 1 including this year’s smash success, Pippin. Mr. Razze is also a composer who has created musical scores for The Devil’s Disciple, Antigone, Cyrano de Bergerac, The Tempest, Twelfth Night, Romeo and Juliet, The Merry Wives of Windsor, and A Midsummer Night’s Dream.

Eric T. Haugen (Lighting Designer) In recent seasons, Eric has designed the lighting for some of the more memorable PSF productions such as: Ragtime, Evita, West Side Story, Les Misérables, Fiddler on the Roof, Oklahoma!, Sweeney Todd, South Pacific, Dracula: The Journal of Jonathan Harker, King Lear, Amadeus, and My Fair Lady, among others.  His theatrical lighting has been seen Off-Broadway and in regional theatres across the country.  Through his company, Luminous Design Studios, Eric provides lighting designs for television, themed entertainment, and architectural projects worldwide. In August of 2018, Eric joined the faculty of DeSales University. www.LD-Studios.com

Shelby North (Production Stage Manager) Shelby is delighted to be making her PSF debut! She is a Philadelphia based Stage Manager whose previous credits include Bridges of Madison County (Philadelphia Theatre Company), Oliver! (Quintessence Theatre Group), Assassins, Father Comes Home from the Wars (Yale Repertory Theatre), The Petrified Forest, Church and State, Fiorello!, Constellations, and Million Dollar Quartet (Berkshire Theatre Group). Shelby is a graduate of Yale School of Drama with an MFA in Stage Management.