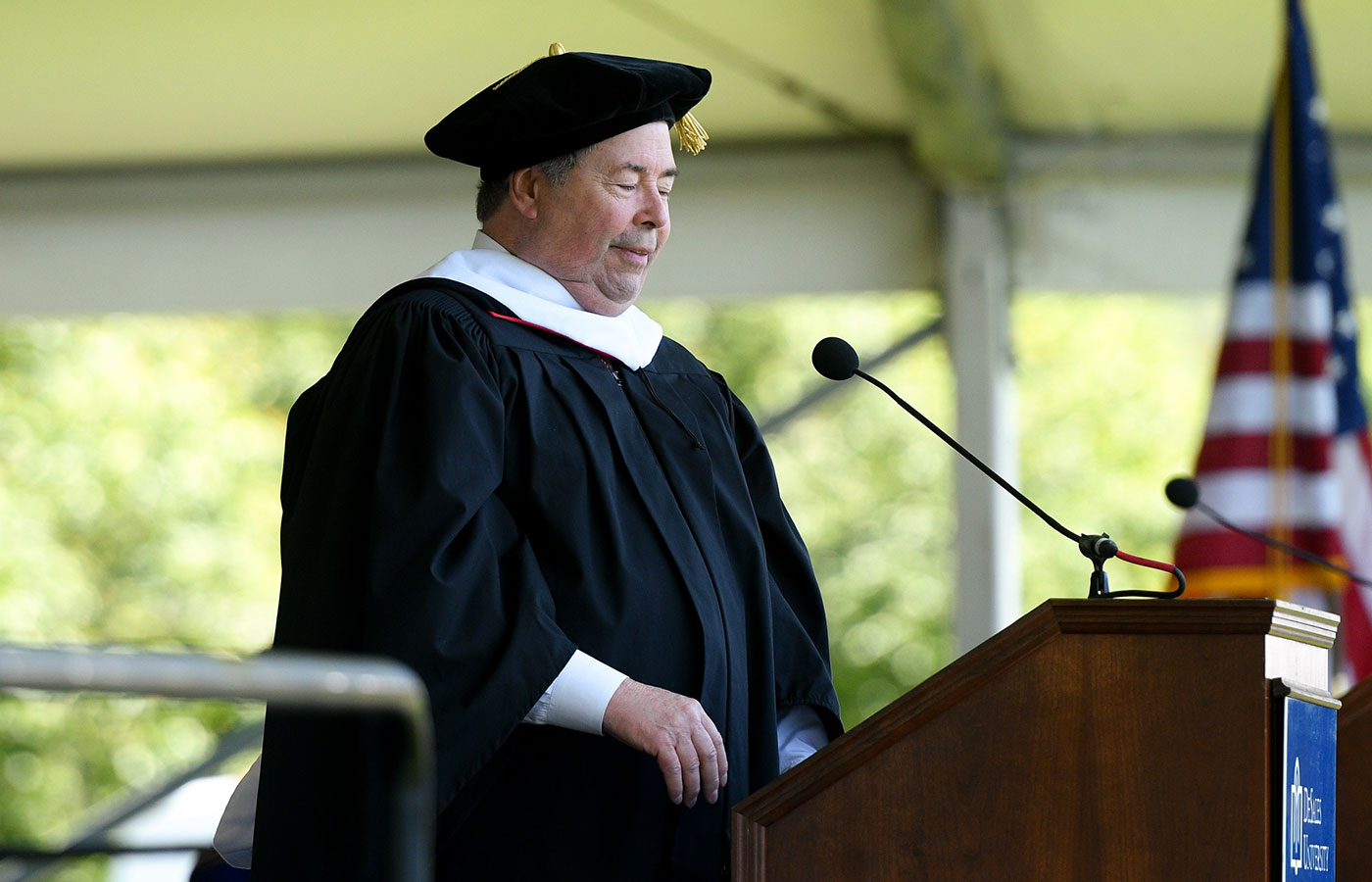 President, Father Greenfield, trustees, faculty, members of the DeSales community, parents, siblings, friends and, most importantly  – you – the Class of 2019.  Congratulations to each of you!  You did it!

Fifty years ago, I recall sitting approximately where you are sitting today, and listening with rapt attention, as you undoubtedly are today, to my commencement speaker.  I have to say there are significant differences between this University now and the place of my graduation.  First, I didn’t graduate from a University – I graduated from a college.  Second, the name of my institution was not DeSales University.  It was Allentown College of St. Francis DeSales.  Third, even our mascot at that time, the mythical centaur, is gone.  You now have a more down-to-earth mascot - the bulldog.  Fourth, there were no women on the faculty – except for Ruth Butler, who taught art and music appreciation.  And, there were no women students at all.  Today, DeSales University is blessed by diversity both in its faculty and students.

While there have been many changes over the last fifty years, the important things have not changed.  The interactions I have had recently with DeSales administration, faculty, staff, and students illustrate to me that the Salesian spirit that permeated this institution in 1969 has only been strengthened.  The Salesian spirit in each of you is evidence that the institution maintained its foundation of spirituality and Christian humanism while building its educational expertise.

Commencement speeches usually involve some old person giving advice to the new graduates.  I don’t want to disappoint, so I have four pieces of advice for you.

Last week, my wife was going through some photos we collected over the years and she found one of me at my graduation from Allentown College.  When I compared the young 1969 graduate in that photo with the person staring back at me in the mirror--with the additional 70 pounds--I knew that my first piece of advice to you today would be this: keep up your gym membership.

My second piece of advice: be confident in the preparation you have received from this institution.  When I say preparation, I mean both educational preparation for your career and preparation for life including spiritual preparation.  I recall when I was nearing graduation from Allentown College, I didn’t feel particularly confident.  My degree was in chemistry and I wanted to teach chemistry at the college level.  To do that, I needed at least a Masters degree and preferably a Ph.D. in chemistry.  So I applied to several graduate schools.  But I was concerned that I would not be accepted because Allentown College was a small, new, school and did not yet have a reputation.  I was surprised that I was accepted into almost all of the schools to which I applied.  I decided on Georgetown University.  I remember receiving from Georgetown a student roster for my graduate program.  I noticed most of these students had attended Ivy League schools or other schools with impressive reputations.  I was concerned about the competition I would face.  I talked with Dr. Harry Warren, the head of the chemistry department at the time and my favorite teacher and mentor at Allentown College.  He advised me not to worry – to have confidence that Allentown College had prepared me and my classmates to effectively compete with students from virtually any other undergraduate school.

And he was right.  I found when I got to Georgetown, I was as well prepared, if not better prepared, for graduate studies than virtually all of my classmates.  From everything I have read in the DeSales University publications over the decades and what I have seen in subsequent visits, I’m convinced that DeSales University is a substantially improved educational institution over the one I attended fifty years ago.  I know that each of you has acquired a first rate education and you are well-prepared to compete with others both in graduate and professional schools and in your chosen careers.

The 110 graduates of my class of 1969 are educators, principals, doctors, lawyers, priests, ministers, scientists, judges, executives, and managers.  As best I can tell, each has achieved significant success in his chosen vocation.  You will too.

Most importantly, be confident in the spiritual foundation you have received.  For at DeSales University you have learned to anchor your moral code, to ethically interact with your world, and to empathetically support others.  In other words, to live the Salesian spirit.  The faculty and staff here have helped to prepare you for such a life.  Following the inspiration of the Oblates of St. Francis de Sales, the University’s administration, faculty and staff have taught you to “Be who [you] are and to be that well,” as St. Francis DeSales said.

My third piece of advice: pursue your wildest dreams, as Napoleon Dynamite’s friend, Pedro, might say.  Use the confidence you now have to find a career that you are passionate about and pursue that career with persistence.  Some of you may know exactly what you want to do, have been preparing for it for years, and will end up pursuing that career.  Others, like me, initially thought they knew what they wanted to do, but fate intervened and changed things.

My son, Neil, is an example of one who knew what he wanted to do from day one.  He wanted to be in the film industry.  When Neil was about nine years old, I recall walking into our living room and seeing him about to film a scene in the fireplace.  He had built a model house attached to a model explosives factory.  The explosives factory was lined on the inside with fire crackers.  The buildings had windows and were inhabited by Playmobile people.  Neil started filming and after a time lit the edge of the explosives factory.  The flames grew, the fireworks started to go off, and both buildings burnt to the ground with a storm of explosions.  I liked the way he designed the whole thing, but frankly I was a little concerned.  Would he be pursuing a career in filmmaking – or perhaps a career as an arsonist.  Luckily, he continued his interest in film, studied film in school, and joined a post production company in Santa Monica.  This year he was nominated for an Emmy for a Netflix documentary he edited called Wild Wild Country about a free love cult in the 80s in eastern Oregon.  You should see it – you will really like it.  Neil knew what he wanted to do from day one—he did it and  he’s been successful.

But most don’t find their dream career right away.  There are twists and turns along the way.  The journey is not a direct route, but changed sometimes by what some might call fate; others, like your Oblate faculty here, might call it the will of God.  Part of the Salesian spirituality is following the will of God – not your own will.  I didn’t really understand so well back then what the will of God meant – but now I think I have a better sense of it.  I was a member of the Oblates of St. Francis de Sales until shortly after college.  I started college as a music major at Catholic University of America.  I really liked music, but I was transferred by the Oblates to Allentown College.  Allentown College had no music department, so I was forced to pick another major.  I was disappointed because, as I say, I really liked music, but after taking a chemistry course with Dr. Warren, I decided to major in chemistry.  As I mentioned earlier, I then went to Georgetown for graduate school in chemistry.  By the time I left Georgetown, the chemical industry had taken a nosedive and it was virtually impossible to get a job teaching – which is what I wanted to do.  Colleges and universities were hiring only those people who had substantial experience in the chemical industry.  I sent out over a hundred letters and resumes to colleges and universities seeking interviews.  I received only one response –“no”.  The others never even responded.   Disappointing!

About this time, I met with a friend who had earlier graduated from Georgetown with a degree in chemistry.  He had decided to go to law school and pursue a career in patent law – combining his background in chemistry with the law.  I seriously thought about this and decided to do the same thing.  Eventually I became successful as a trial lawyer handling patent infringement cases involving technology such as chemistry.  I have also been able to follow my dream about teaching.  I have been an Adjunct Professor at the University of Washington Law School for the last two decades.

So it was not a direct route to my career – fate, or the will of God, intervened several times requiring me to change my idea of what I wanted to do.  And although I did not like these changes at the time, I believe now they worked out much better for me than if I had stubbornly stuck with what I initially wanted to do.  You need to be flexible and open to new opportunities – open to the will of God.

My fourth, and final, piece of advice relates to gratitude.  We all have a desire to be successful.  Part of that desire is wanting “more” – wanting more material possessions, to earn more money, or to win more trials.  The desire for “more” sometimes blinds us to what we already possess and take for granted.  We need to appreciate what we already have and that appreciation is called gratitude.  The Benedictine monk, David Steindl-Rast, in a Ted Talk, said: “In daily life, we must see that it is not happiness that makes us grateful, but gratefulness that makes us happy.”

We need to be grateful for the people who support us.  My sister Helen – and her husband Harry – have supported me my entire life.  They attended my graduation here fifty years ago and they are here today.  I am grateful for them.

You should be grateful for all you have and appreciate all that has been given to you and all that you have earned.  Be grateful for those who have supported you, and will support you, in the future.  Think of all those who helped you get through these last four years.  Your parents – who sacrificed to support you financially and who encouraged you in your studies at DeSales University.  Your siblings.  The faculty and staff of this institution who have dedicated their lives to your educational and spiritual well-being.  And, importantly, be grateful for the friendships you have made during these last four years.  Foster them, don’t take them for granted – so you can continue to laugh together with your friends into your 70s.

So today we have all come here to honor you – the graduates of the class of 2019 – for your hard work in developing both intellectually and spiritually.  My hope is that you leave this university confident that you can compete in your careers with the best of those from other schools, that you pursue your dreams with persistence yet, at the same time, with an openness to what fate (or God’s will) might bring.  And that you are grateful for all you have been given and all you will be given.

May your wildest dreams come true – and, yes, keep up your gym memberships.  Good luck!!