Dedan Brozino '06 is chief development officer for the Rose Bowl Stadium. And on New Year's Day, he’ll be at the “granddaddy of them all.”

On January 1, millions of Americans will celebrate the New Year with pork, sauerkraut, and a favorite football tradition—the Rose Bowl. Dedan Brozino ’06 won’t just be watching the granddaddy of all college football games. He’ll be working at the storied Rose Bowl Stadium, taking in the sights, sounds, and spectacle of it all.

The sport management major serves as chief development officer for the stadium. He works to raise philanthropic funds to protect, preserve, and enhance the nearly 100-year-old landmark. And the position comes with its fair share of perks.

“Unfortunately, I have to ‘work’ every major event that we have: from the Rolling Stones next year to Ed Sheeran this past year to every football game that we have. I’m very fortunate that I get to go to all of those events because they are larger than life.”

During the big game between the Washington Huskies and Ohio State Buckeyes, Brozino will bounce around the stadium, visiting with various people. But he always finds a quiet spot to pause for a few minutes and take everything in—particularly during the B2 Bomber flyover.

“The way the stadium is situated in a special location, it’s surrounded by the San Gabriel Mountains,” he says. “You can see this bomber coming in from miles out. When it gets to the stadium, it dips down. And you almost feel like you can touch it. It’s such a piece of Americana and gives you such pride as a new year begins.”

More than 100 million people have visited the Rose Bowl since it was built in 1922. They all have their own stories to share and Brozino says his role is to tap into that love. He’s currently working on a $40 million campaign to raise money for the stadium’s centennial birthday.

“We’re very fortunate because the Rose Bowl Stadium doesn’t have an alumni base. We’re not a church, we’re not a hospital, we’re not a university—yet, we are a chapel to so many. So it’s very unique. You really have to find those different [areas] where people care about it.”

Brozino has found loyal supporters in football fans and celebrities alike. On just his second day on the job, the stadium hosted its first ever country music show—a Kenny Chesney concert. 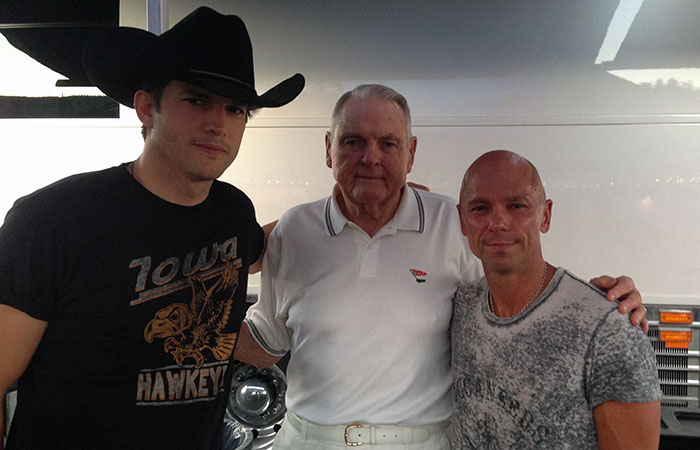 “Kenny Chesney had a deep, deep love for the Rose Bowl,” Brozino says. “He has a quote out there that says, ‘there are some places that still seem unreachable as a performer and the Rose Bowl is one of them.’”

At the time, the stadium was in the midst of a project to name its broadcast center after legendary broadcaster Keith Jackson. Knowing that Chesney was a lifelong college football fan, Brozino and the staff decided to introduce him to Jackson.

“We brought Keith out into Kenny’s green room and Kenny hugged him like it was a kid meeting Santa Claus for the first time.”

Brozino spent the next three hours on Chesney’s tour bus listening to him and Jackson trade stories. A week after the show, Chesney sent the staff a text message asking about the broadcast center and how he could help. Within days, the country superstar sent a check to close out the fundraising campaign and ended up becoming the lead donor.

“For him, hearing Keith Jackson’s voice, that’s what he grew up with. Supporting that and naming [the broadcast center] for Keith was his way of protecting this venue. It brings this childlike nature to the stadium because everybody has a story.”

Brozino grew up in Lehighton, Pennsylvania and chose DeSales because it aligned with his family’s religious and educational values. He credits the University with teaching him the fundamentals of sport management, how to write well, and, perhaps most importantly, with making him a relationship-driven professional.

“I’m not at my desk from 8 to 5 every day. I’m out and about, talking to people. It’s a relationship business. I don’t know that I would have had the courage or the knowledge to do that if it wasn’t for the course curriculum at DeSales. I’ve always felt confident since I got that degree.”

Brozino married Danielle Jenson, a fellow DeSales alum, and moved out west to get his master’s in sport management at Long Beach State University. He spent about a decade working in the athletic department at Long Beach State and its senior executive team, before landing at the Rose Bowl—a National Historic Landmark and a California Historic Civil Engineering landmark.

He loves the fact that each day on the job is different and that he gets to build relationships and share in the love and admiration that people have for the iconic stadium.

“The biggest thing about my job is that the Rose Bowl is bigger than any of us,” he says. “In today’s sports entertainment world, venues don’t really last that long. They last 20 to 30 years. It’s nice being able to protect and enhance a brand that’s bigger than I’ll personally ever be. It is something special.” 🌹