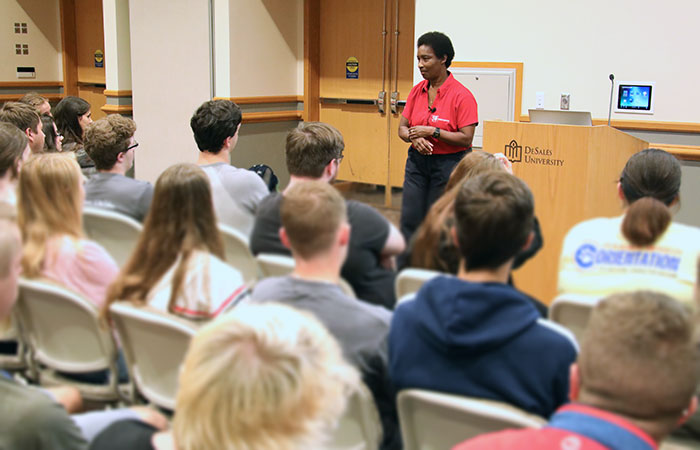 Loretta Claiborne is the first to admit that without Special Olympics, she wouldn’t be here today.

The world-class runner and recipient of ESPN’s ESPY Arthur Ashe Award for Courage doesn’t mince words when describing the impact the organization has had on her life.

“If it weren’t for Special Olympics, I think personally I’d be behind bars or six feet under,” she told a packed crowd at DeSales University’s first Character U keynote of the year.

The event was held just weeks before DeSales hosts the Special Olympics Pennsylvania Eastern Fall Sectional on October 14, 2018. (See details of the event on our Facebook page)

Claiborne was born partially blind and intellectually challenged, and was unable to walk or talk until the age of four. She grew up in the projects with six siblings and a single mother.

Claiborne struggled in school and was held back in kindergarten and the first grade. Her school wanted to place her in an institution, but her mother refused.

“I took the beatings,” Claiborne said of her childhood. “I still bear some of the scars of the bullying. And yes, no matter how old you get, there will still be bullies.”

In 1970, things started to change. She learned about Special Olympics, which served as a positive force in her life. It helped to bring her out of depression, taught her how to advocate for herself, and gave her a voice and sense of importance.

Throughout the years, Claiborne has competed in 26 marathons, twice placing among the top 100 women in the Boston Marathon. She’s received honorary doctorate degrees from Quinnipiac University and Villanova University, and has been inducted into the Women in Sports Hall of Fame and the Special Olympics Pennsylvania Hall of Fame. In 2000, Walt Disney Productions made a movie, The Loretta Claiborne Story, about her life.

“There was a time when I thought I was worthless,” Claiborne said. “I thought maybe I should do away with my life; maybe I have no value. I’ve been blessed. Special Olympics was that door that opened the brighter light for me.”