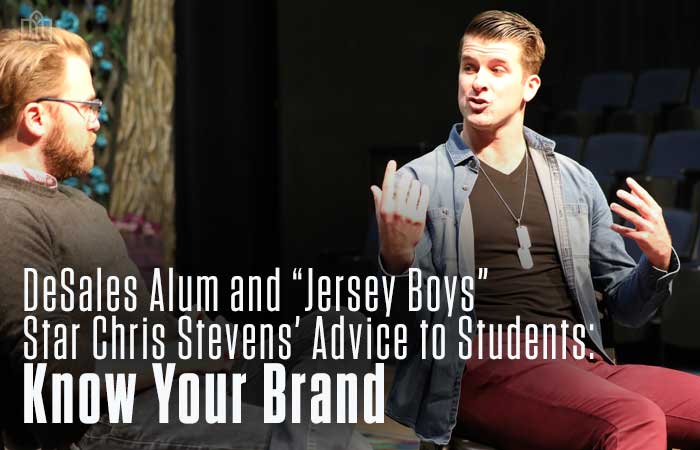 Chris Stevens '11, who's currently starring in the Broadway National Tour of Jersey Boys, stopped by DeSales to share some tricks of the trade with theatre majors.

Stevens double majored in theatre and communication and was among the first group of students to travel to New York City to perform for an audience of agents, managers, and casting directors as part of DeSales' annual Actor Showcase.

His first tip to aspiring actors: learn to market yourselves.

After graduating from DeSales, Stevens moved back home to South Jersey and started working at a bagel shop. Then, he got his break. Three weeks after returning home, he booked the national tour of Cats.

Since then, he's also starred in the national tour of Mamma Mia!, and regional productions of Tarzan, Grease, and Footloose. Still, he told students to be prepared for those not-so-glamorous positions.

"Find out what you can do besides theatre because I can promise you, you will spend years doing that," he said. "It makes the highs all that much better."

His final tip to students: know your strengths and weaknesses, and know your own brand.

"This business is hard. It's very hard. For every 50 auditions, you might get one call back. If you work hard and put yourself out there, I promise you it's going to be that much easier."

Learn more about the programs mentioned in this article: