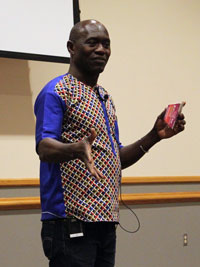 Just a little snack. That's what Thomas Awiapo credits with saving his life 40 years ago. Today, he travels the United States sharing his story of survival and hope.

"I want you to imagine the power of a little snack in the life of a hungry child," he told DeSales students. "That little snack was the greatest justice I received in my life."

Awiapo grew up in a village in Ghana. There was no access to running water or electricity. Villagers walked miles every day to the nearest river for water. Awiapo's parents died when he was just a boy, leaving him and his three brothers as orphans.

"We were very sad kids," he said. "We cried for food, we fought for food. Two of my little brothers died. I watched them die. My oldest brother just simply couldn't take it so he decided to run away from the village."

Awiapo had lost everything but he wasn't alone for long. Catholic Relief Services (CRS) built a school near his village. Every morning, they provided a little snack for any child who came, thanks to the CRS Rice Bowl program.

Awiapo found food, education, and faith at that school. Years later, he earned his master's degree in the United States and returned to his home country to work for CRS. He's currently working to open a school for children facing the challenges that CRS Rice Bowl helped him to overcome.