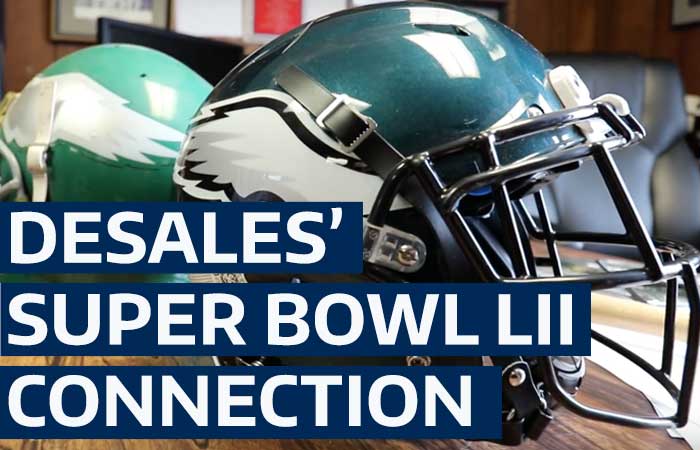 The Phillie Phanatic that adorns the glass door outside Lloyd Sixsmith Sporting Goods in Northeast Philadelphia serves as a stark reminder of the city’s last championship. But by Sunday night, that decade-long drought could finally come to an end.

His store — a staple in Northeast Philadelphia that provides uniforms and equipment to athletes of all ages — also supplies equipment and other goods to the Eagles.

When some of the biggest names take the field at U.S. Bank Stadium for Super Bowl LII – think Nick Foles, Lane Johnson, Alshon Jeffery, and Ronald Darby, just to name a few – they’ll be wearing helmets, facemasks, mouth guards, and other gear supplied by Sixsmith.

The store has been around on Frankford Avenue for nearly 70 years. Lloyd’s oldest brother, Jim, bought it from original owner Albert Sixsmith back in 1973. “The first person he hired was my father,” Lloyd says. “And at one point, the whole family worked at this store.”

Over the years, his brothers and sisters went on to different careers. But Lloyd, who graduated from Allentown College of St. Francis de Sales with a degree in English, stuck with the family business. The move paid off.

Lloyd Sixsmith is not your typical sporting goods store. While it does have Eagles championship gear and underdog shirts on sale, the store is primarily focused on the player, not the fan. It’s that love of the game that’s led to a shared history with customers year after year, generation after generation.

The store recently won a contract with the School District of Philadelphia to become the official supplier of uniforms and equipment to 47 high schools. That’s what Lloyd refers to as the heart of the business. “Winning that contract certainly takes up a lot more of our time and is a bigger part of our team business than an NFL team.”

Still, being a supplier for the Eagles gives him a sneak peek inside his favorite team. This season, the birds wanted to hand out a weekly award to the defensive player with the biggest hit of the game. So they called Lloyd and asked for a Louisville Slugger engraved with the player’s name, opposing team, score, and date of the game.

For the first few weeks, Lloyd took bats from their regular stock and had them engraved. Then, he took it a step further – having custom bats created in the Eagles signature kelly green. “We never heard of it — supplying baseball bats to a football team. I always thought that’s an odd twist of things.”

Come Monday morning, the NFC championship T-shirts at the store could be replaced with an even sweeter slogan — Super Bowl champions. But the new title won’t be easy to come by. First, the birds have to defeat five-time Super Bowl winner Tom Brady and the New England Patriots – the same team that beat them in Super Bowl XXXIX back in 2005.

“It’s so exciting,” says Lloyd. “The customers that walk in the store, everybody’s just out of their minds, over-the-top excited. It’ll be amazing.”

As far as predictions go, Lloyd says, “Carson got us to this point; Foles will be the hero.” If that happens and Philly finally gets to hoist the Lombardi Trophy, you can kiss that Phillie Phanatic on Lloyd’s side glass door goodbye.

“We will be switching that to Swoop should the Eagles win. We already have plans for that.”