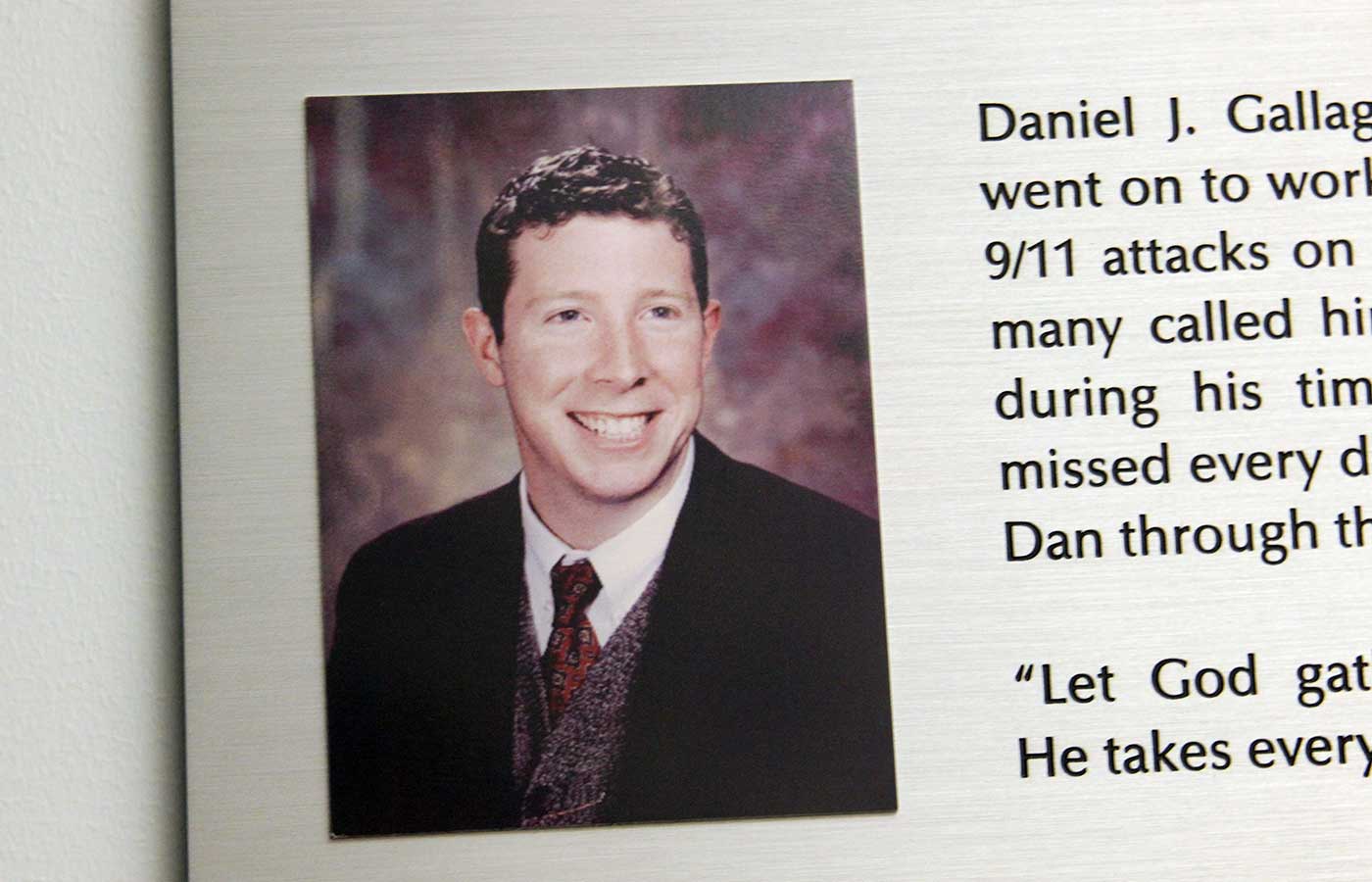 From the beach near his hometown of Middletown, New Jersey, Daniel Gallagher ’00 had a clear view of the New York City skyline. Several neighbors and family friends around town commuted there every day to work on Wall Street. Attracted to the bustling world of finance, Gallagher decided early on that he wanted that type of career, too.

Gallagher studied accounting and graduated from then Allentown College of St. Francis de Sales in the spring of 2000. A few months later, he landed a job as a bond trader at Cantor Fitzgerald in New York, exactly where he wanted to be.

As he settled into his new career, Gallagher had to complete a series of tests, culminating in what’s known as the Series 7 exam, to earn his license to sell securities. He passed it on his first go in March 2001.

Several months later, Gallagher bonded with his older brother, Sean, over beers and baseball while celebrating the Labor Day holiday at a hometown bar. They talked about their lives and careers while watching a near-perfect game by the New York Yankees.

“It was evenings like that that I looked forward to sharing with my brother going forward,” Sean says. “But little did I know that evening would be the last time we would spend together.”

Nine days later, on Sept. 11, Dan Gallagher went to work at the World Trade Center and never returned. He was one of nearly 3,000 people killed in the terrorist attacks—one of 37 from Middletown and the one alumnus of DeSales.

“He chose DeSales, and I know for a fact he didn’t regret it one bit after he got there,” recalls Sean Gallagher. “He loved the atmosphere, he loved his professors, and, most of all, he loved his network of friends.”

His friends loved him just as much.

“Dan was the guy at DeSales that kind of intersected every friend group,” says Kate Corcoran ’00.

Gallagher was also known as the life of the party. “Reds” became one of his most popular nicknames. Some assumed it owed to his curly red hair; in fact, Quill explains, it was because Gallagher always seemed to have some Killian’s Irish Red, his favorite beer, close at hand.

Following Gallagher’s tragic death, his friends and fellow alums organized a barbecue to remember him outside the Heights, where the friend group lived their senior year. The barbecue turned into an annual, early-summer tradition for several years, becoming a way to bring the group back together.

Gallagher’s family and friends also created the Daniel J. Gallagher ’00 Memorial Fund, which now holds a value of more than $110,000. The family made a generous initial gift, and, in 2007, DeSales awarded the scholarship for the first time. The fund helps multiple students with financial need per year. To date, seven students have benefited in all.

Gallagher’s younger sister, Erin, explains why the scholarship fund was a fitting way to continue his legacy.

“That’s just the kind of person Dan was: He always wanted to help,” Erin says. “He was such a supportive brother to me over the years. And from the stories I’ve heard from his friends recently when we saw them just this September, they would say how he’d help them with their homework or projects. He was that person who just wanted to help people succeed and do their best. It feels great to know there’s something in his name that’s continuing to help people pursue their goals and dreams.”

The Gallagher family pledged an additional $10,000 to the fund in honor of the 20th anniversary of 9/11. DeSales also marked the anniversary with a series of events on campus to honor the victims, and Gallagher in particular.

Following a Speaker Series panel the evening of Sept. 9, Rev. Kevin Nadolski, OSFS, vice president for mission, led an interfaith service at Connelly Chapel the next morning, where Sean Gallagher spoke about his brother.

“When I think about DeSales, I think about a very close-knit community,” Sean says. “I think that’s one of the reasons the loss of my brother on 9/11 has such an impact here. I do find joy, if you will, in the fact that DeSales chooses to remember my brother.”

The University also rededicated a second-floor conference room in the Gambet Center in Gallagher’s name. The Gallagher family donated a number of artifacts they’d received in the wake of 9/11 to display, including a box from Cantor Fitzgerald with a piece of steel from Ground Zero, a New York Times aluminum plate used to print the page with Gallagher’s obituary, American flags bearing the victims’ names, and a miniature version of the Tear Drop Memorial that stands in New Jersey.

“It felt good to know that they’re going to be seen by people,” Erin Gallagher says. “Let them be seen.”

Among the attendees was Stephen Druckenmiller ’19, M’20, a graduate of the physician assistant (PA) program, who received the Gallagher scholarship for his first four years at DeSales. While the second floor of Gambet houses the business department, Druckenmiller also remembers having a PA class upstairs in the conference room that now bears Gallagher’s name.

Now a PA in emergency medicine at St. Luke’s University Health Network, Druckenmiller wanted to attend the University’s 9/11 program so he could learn more about Gallagher, thank the family in person, and offer his condolences.

“I find it amazing how much they’ve done in terms of fundraising,” Druckenmiller says. “I feel like it’s a sign as to what kind of a legacy he left.”

A legacy that remains a guiding light in the countless lives that Gallagher touched, and one that will continue to inspire future generations of students for years to come.