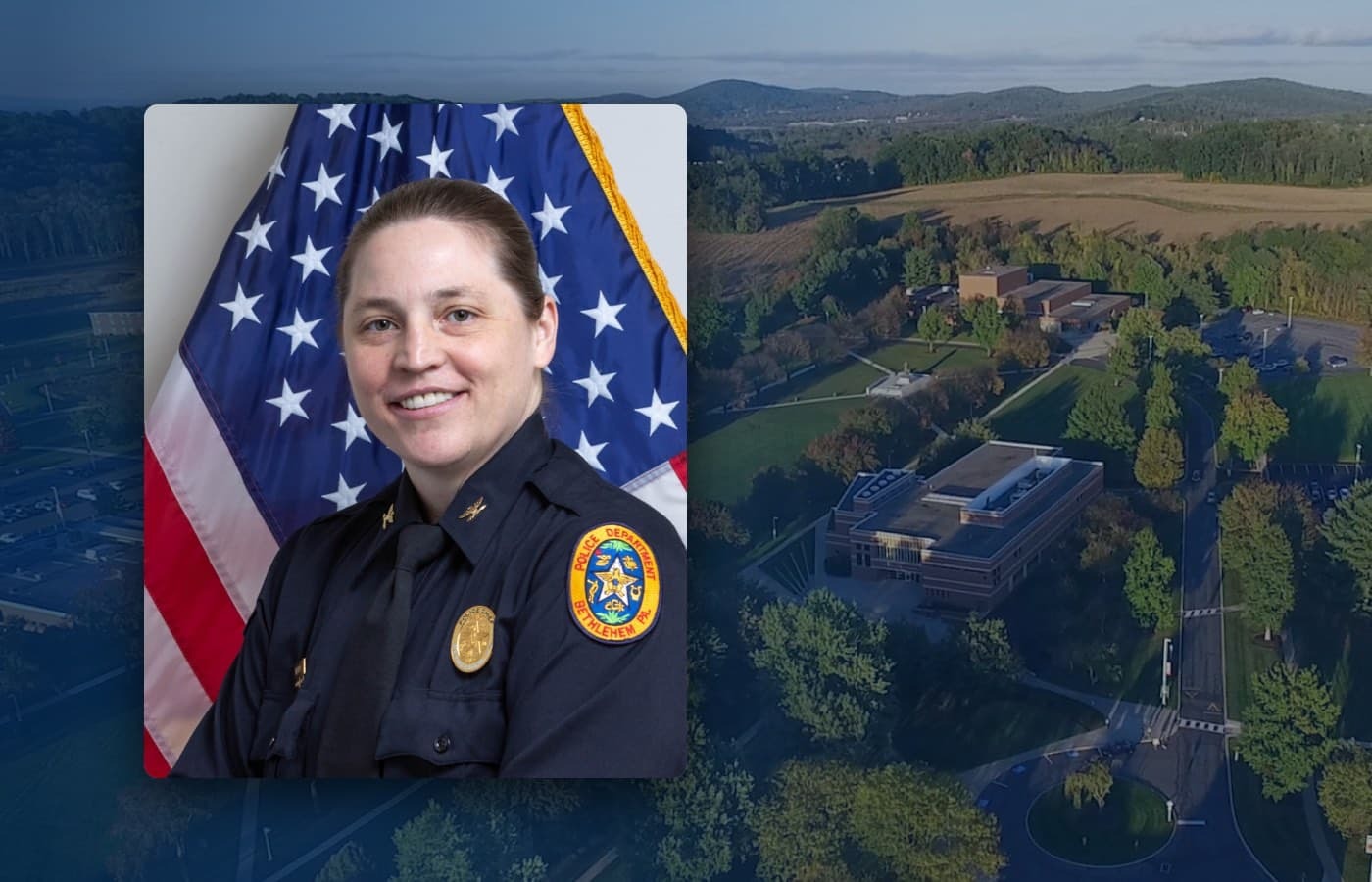 If Michelle Kott ever decides to write her autobiography, the tagline might be, “relentless overachiever trying to make the world a better place.”

Kott is the first woman to wear the chief’s badge in the Bethlehem Police Department, and she credits her time at DeSales University with helping to shape the leader she’s become. “I’ve always wanted to help people,” she says. “It’s something I’m passionate about.”

Kott grew up in coal country—McAdoo, Schuylkill County—and says it was clear from an early age that she would pursue a career either in law enforcement or the military. She shares that her family knew too, “I think they saw this was something I was set out to do.” It became clearer after graduating from Marian Catholic High School in 2000 that she would pursue police work as her vocation.

After briefly attending Saint Francis University in Loretto, Pa., Kott transferred to DeSales for the spring semester of her first year and never looked back. “It was a really exciting time on campus,” she says. That was when Allentown College of St. Francis de Sales was making the switch to DeSales University, which brought new energy, new construction, and even a new mascot to the college community. Kott says she was in her element. “I was really able to thrive and dig deep in the criminal justice program.”

Her eagerness to learn didn’t go unnoticed by her professors. “I was a pain in Mr. [Albert] Sproule’s side,” she says with a laugh. Sproule began teaching courses at DeSales in 1995, following a two decade-plus career as a special agent with the FBI. Kott says she pestered him to help her arrange an internship because she, too, was eager to roll up her sleeves and get a taste of real-life law enforcement work.

Sproule still has the letter of recommendation he sent on Kott’s behalf to the Bethlehem Police Department in 2003. He says Kott took four of his courses and he remembers her well. “I can still see [Kott] on the second row, toward the back,” he says. “I was always impressed by her self-confident attitude. [She had] a good physical presence, which is important in law enforcement. She’s an exceptional person.”

Soon enough, Kott would get her chance to prove herself outside the classroom. She graduated from DeSales in 2004 and fielded multiple job offers, including one from the U.S. Secret Service that would have meant relocating to Washington, D.C. Ultimately, she decided to stay closer to home and join the ranks of Bethlehem’s finest. Kott says she felt a kinship with the city. Her grandfather had worked for Bethlehem Steel; also, she had interned for the police department, so she had an idea of what she was getting into.

Kott started as a patrol officer and steadily rose in the ranks. “As various promotions came up, I rolled with them,” she says. But stepping into the department’s top job was never part of her plan. “I’m a worker bee,” she explains. The chief’s position comes with a lot of administrative work, leaving less time to spend out on the streets.

Still, it was an opportunity that Kott simply couldn’t pass up. In Oct. 2020, she was sworn-in as Bethlehem’s first female police chief, following a nomination from Mayor Bob Donchez and unanimous approval from city council. Kott quickly acclimated to the role and made community policing a top priority at a time when race relations declined to their lowest level in decades.

Kott was named chief just a few months after the death of George Floyd in Minneapolis prompted protests and calls for change around the country. Hundreds rallied at Bethlehem’s Payrow Plaza to demand justice for Floyd and an end to police brutality.

Kott says she recognizes the gravity of her position, especially as the nation continues to grapple with a racial reckoning sparked by Floyd’s death and a number of other high-profile police killings. “In the Lehigh Valley, there was absolutely an outcry,” she says. “People were wondering if they could trust the police or not. There were a lot of people hurting.”

At the same time, Kott understood that she needed to maintain the morale of her own officers. She says she’s made it a priority to step up the professionalism of the department, as well as to bring officers and community members together as often as possible for events that allow them to get to know one another on neutral ground. Opportunities for fellowship included: movie night at Graceway Community Church, showcase day at Northeast Middle School, and Coffee with a Cop Day at Starbucks. “I think the officers have more fun than the community at those events,” Kott says.

Kott is also proud of a social work program that’s been implemented during her tenure. It’s an effort to provide officers with a new tool to respond to situations in which no criminal act has occurred, but some sort of intervention is required: “We’re not just spinning our wheels and continuing to go to a residence for issues that are stemming from a lack of social services.”

Those households might be struggling with issues related to mental health, alcohol dependency, unemployment, or even elder care. Under the program, officers can connect residents with a social worker who can assess the situation and follow up with solutions and resources that hopefully will head off future problems. It’s a pilot program that Kott says could be expanded down the road.

The overachiever in Kott has kept her busy in the classroom as well, even as she balances her career in law enforcement with her role as a wife and mother—she has a son, Noah, 7, and a daughter, Allie, 3, with Kristen Snyder, an ICU nurse. Kott earned her master’s degree in criminal justice from Saint Joseph’s University in Philadelphia in 2010, and later earned a doctorate in criminal justice from California University of Pennsylvania.

When she’s ready to step away from law enforcement, Kott hopes to teach criminal justice at the collegiate level. So perhaps the next time she returns to the DeSales University campus, it’ll be as Professor Kott.