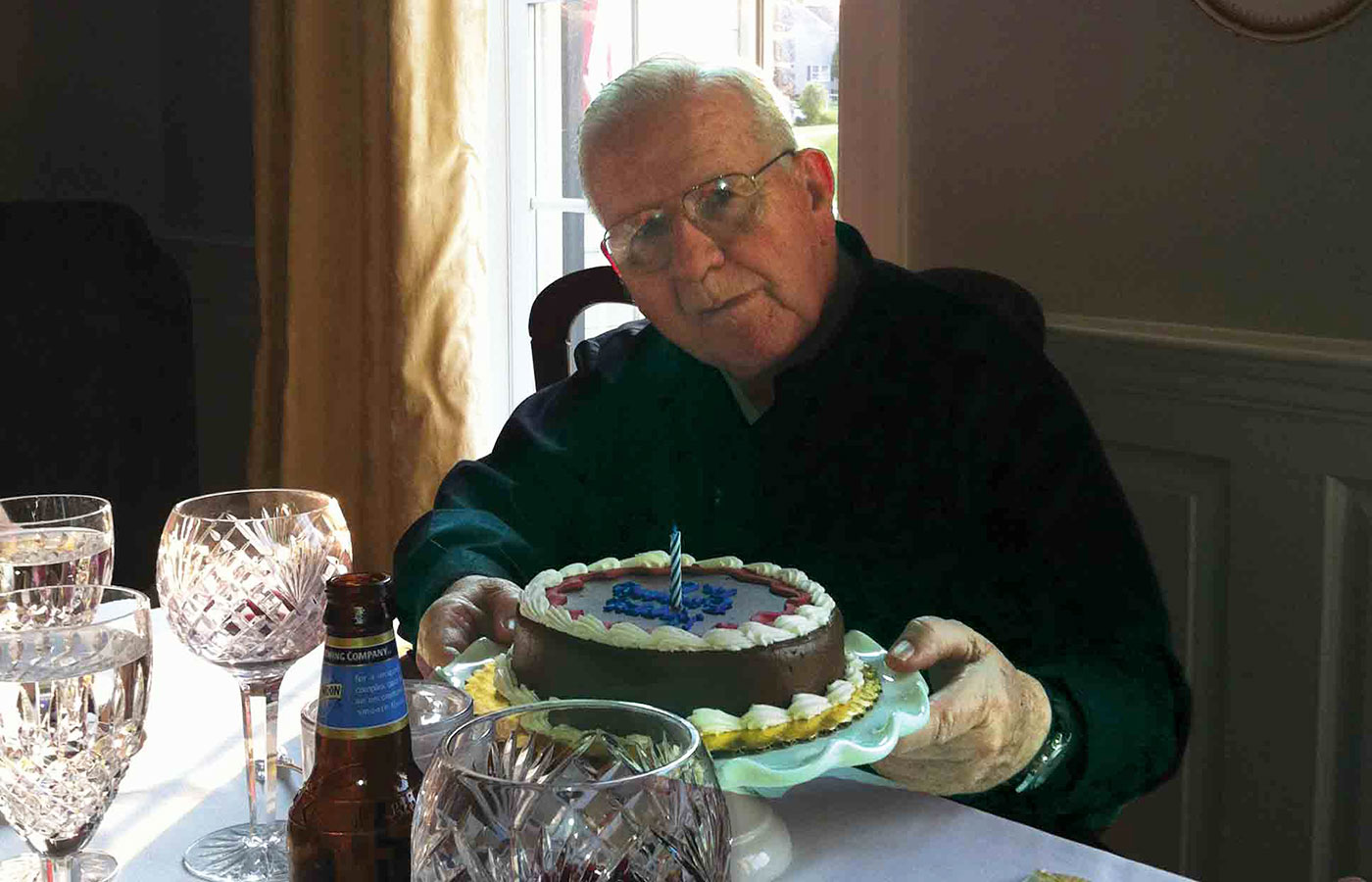 Joe Forish can still remember his first interaction with Rev. William Guerin, OSFS, even after all these years. While a student at Philadelphia’s Northeast Catholic High School in the 1970s, Forish was selected to attend a leadership development activity that would require him to miss some school. He needed clearance from the administration, namely Fr. Guerin—Northeast’s principal at the time.

“I can still remember going to him, hat in hand, and him quizzing me on why I felt something was going to be valuable and how it contributed to my Catholic education and so forth,” Forish said.

Though Forish might have felt intimidated that first time in the principal’s office, Fr. Guerin was “super supportive—and often, when he passed me in the hallways or when I had to go back and see him about something else, would ask me what I learned from those activities,” he recalled.

It wasn’t long before Forish and Guerin struck up an important relationship, one that lasted as the student headed to St. Joseph’s University and the priest became the treasurer at Allentown College of St. Francis de Sales. Not only did Fr. Guerin become a spiritual adviser for Forish, he added him to an ever-expanding Rolodex of students who became friends and contacts around the country.

The beloved Oblate passed away in 2017, but today the Guerin network lives on.

Following a life dedicated to serving those around him, Fr. Guerin’s memory is carried on today, through both the work of the people he touched and the philanthropy to DeSales University and the Oblate community that he inspired.

“When you were with Father G, or ‘G,’ it was always focused on you, because that’s what he was about,” said Tim Nolan ’77, another friend of Fr. Guerin’s and the former chair of the DeSales Board of Trustees. “He was all about working to make the (people) with whom he worked better individuals.”

Sometime after Forish had graduated college, he remembers Fr. Guerin reaching out to him with an invitation. Fr. Guerin wanted to gather his contacts and friends twice a year at the Union League in Philadelphia for breakfast meetings, which would include a guest speaker and the opportunity to mix with one another.

These breakfasts caught on and continued for decades. Often 40 to 50 people gathered to make new contacts and catch up with Fr. Guerin.

“He was the master networker,” Forish said, “before networking was a term that one would readily kind of brand or associate.”

Nolan still keeps some of the “goal sheets” Fr. Guerin gave his pupils. Fr. Guerin asked them to track their life goals in eight categories—financial, career, family, spiritual, physical, social, mental, and miscellaneous—and to keep him abreast of their progress. “If it’s not written down then you’re not committed to it,” Nolan remembers the Oblate advising.

Those in Fr. Guerin’s orbit were always on-call if he had a favor to ask of them, something like speaking to a friend’s son or a new DeSales alumnus about making contacts in their respective line of work.

“But when you’re a part of Father Guerin’s network, you knew that that street traveled both ways, and you knew you could always call on him for advice, for counsel, for connections,” Forish said. “Simultaneously, you could always count on Fr. G to be there for your own family’s key life events—weddings, christenings, funerals, etc.—and he even drove to the shore to celebrate Mass in our home when my wife was very ill.”

Since Fr. Guerin’s passing, Nolan and his wife, Kathleen Kund Nolan ’79, began sponsoring the Fr. Guerin network breakfasts, with help from several other network members who organize them. The Nolans said Charles Lewis ’82 and Anne Lewis ’80, head of DeSales’ Division of Performing Arts, plan to co-sponsor meetings with them going forward.

Fr. Guerin served as the college’s treasurer from 1973 to 1981, where he met many of his pupils when handling their financial aid. John Weiland ’77 has told the story of how he arrived in Center Valley in 1973 only to be told he was $1,000 short on tuition. His fate rested with the treasurer, who told Weiland he was worth taking a chance on.

“Fr. Guerin was the most unselfish man in the world,” Weiland said. “I go back to the first spiritual thought he shared with me as a college student—to be truly happy, one needed to concentrate on an object other than themselves. And, from a practical standpoint, he went above and beyond to introduce me to significant others who were able to mentor me to become my best self. Truly these two factors are his greatest legacy.”

Years later, Weiland paid the Oblate’s act of kindness forward in a big way. His gift to the University of more than $1.4 million marked the largest alumnus gift in DeSales’ history; the new baseball stadium is dedicated in Weiland’s name.

Weiland was not a one-off example, according to Rev. Daniel Gambet, OSFS, the University’s second president, who spent years with Fr. Guerin as seminarians and later colleagues at DeSales.

“Guerin was a genius, in a way, of discovering talent that wasn’t all that obvious,” Fr. Gambet said. “A number of those former students here are now friends of the University because of their connection to Bill Guerin. He had a nose for talented kids who came from what one could call ordinary backgrounds, and he adopted them in a way.”

Fr. Gambet remembered Fr. Guerin as humble, happy to work behind the scenes, and “extremely loyal to the Oblates,” accepting any assignment he was given. Fr. Guerin went on to serve on the Board of Education for the Archdiocese of Philadelphia and on the Board of Trustees for not only Allentown College, but also Neumann College and the De Sales School of Theology.

He was also known for findingways to raise money for the Oblates while engaging with DeSales alumni. He sponsored both a golf tournament and an annual dinner dance held at the Union League. Now named in Fr. Guerin’s honor and coming up on its 28th year, the dinner dance first raised funds for DeSales’ former Oblate seminary, then was repurposed to support retired and infirm Oblates.

Most of all, Fr. Guerin’s legacy of both mentorship and generosity lives on in the Rev. William Guerin, OSFS, Scholarship Fund, which awards $17,500 in scholarships annually to undergraduate students from the Philadelphia area.

Forish and his wife, Marie Ward Forish, who passed away in early 2020, and the Nolan family all have contributed to the scholarship fund. Forish considers the endowment a “living legacy” to Fr. Guerin’s memory, after the positive impact he had on Forish and generations of others like him.

Kund Nolan, a current DeSales trustee, said she and her husband were each the first in their families to attend college. Donating to the Guerin Scholarship Fund made perfect sense to them, given how Fr. Guerin helped people “find their way financially to DeSales” as the treasurer and gave counsel to those in his network.

“It took about three seconds for us to say that was how we wanted to honor him,” Kund Nolan said.

Both Forish and the Nolan family believe the fund will lead to a renewed spirit of generosity in Fr. Guerin's memory. They encourage alumni who knew him and others whose lives Fr. Guerin touched to donate generously to the fund.

“I intend to continue to give to DeSales and continue to support the Oblate community,” Forish said, “because they’ve been a huge impact in my life.”