Walk a Mile in Her Shoes

by David Oblas Nov 5, 2018
The DeSales University Peer Advising Counseling Educating (PACE) team hosted an event on Wednesday, September 28, 2016 as part of the national “Walk a Mile in Her Shoes” campaign. 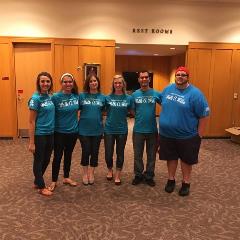 The DeSales University Peer Advising Counseling Educating (PACE) team hosted an event on Wednesday, September 28, 2016 as part of the national “Walk a Mile in Her Shoes” campaign. The program not only benefits Crime Victims Council of the Lehigh Valley, Lehigh Valley Health Network SAFE Nurses, and Turning Point of the Lehigh Valley, but it also raises both money and awareness for victims of sexual assault and domestic violence.

“It is important because it raises awareness for the threat of sexual assault on college campus, and it gets men involved with fighting the issue, which is vital to success,” says Michael Romano ’17, a political science major who organized the walk.

For Wendy Krisak, director of counseling at DeSales, shining a spotlight on sexual assault and unhealthy relationships is vital, especially when it comes to freshmen students. The highest rates of sexual assault happen within the first six weeks on college campuses.

The event began with PACE members sharing victims’ stories, including a female college student who was raped during a campus party and a boy who was beaten by his father throughout his childhood. Two celebrity-filled PSA campaigns were then played, which focused on domestic violence. After hearing a list of sobering statistics about rape, sexual assault, and domestic violence, students strapped on their high heels and walked across campus under the threat of stormy skies.

What began as a small movement in 2001 for campaign initiator, Frank Baird, the program has flourished into a worldwide event that has raised money to benefit rape crisis centers and domestic violence shelters.