by David Oblas Nov 5, 2018
Liz Poindexter graduated from DeSales University in 2007 with a degree in Nursing. 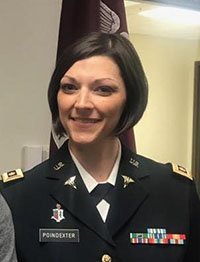 Liz Poindexter graduated from DeSales University in 2007 with a degree in Nursing. After graduation, she commissioned in the U.S. Army Nurse Corps and has served as an Army Nurse for 10 years. Through the Army, Poindexter was able to complete a three-year course of education and obtained her Family Nurse Practitioner certification and Doctor of Nursing Practice degree from the Uniformed Services University of the Heath Sciences in May 2016. She was recently promoted to the rank of Major in July of 2017.

Her scope of practice ranges from newborns to geriatrics, and covers active duty service members, retirees, family members, and military prisoners. She has been stationed in D.C., Virginia, Maryland, and overseas in Germany. She is currently practicing at the Winder Family Medicine Clinic, located just outside of the Madigan Army Medical Center in Tacoma, Washington. She is active in her clinic’s tobacco cessation program, promotes her clinic’s behavioral health counseling, and provides part time coverage for the on-post military prison’s health clinic.

Poindexter has also been heavily involved in nursing research and evidence based projects throughout her career. She gave presentations in San Antonio, Texas and Honolulu, Hawaii on her examination of nursing burnout in Walter Reed, which was later published in the 2010 edition of the journal Military Medicine. More recently, she presented her DNP project that focused on post-sexual assault medical care at the American Association of Nurse Practitioners Conference in 2016.

Poindexter met her husband Sam on the second day of their Army careers in San Antonio, Texas. Sam is a U.S. Army Dental Corps Officer, and currently serves as an oral pathologist. They have been married since 2011, and have a one-year- old son, Lucas. The family currently resides in Gig Harbor, WA.