by David Oblas Nov 5, 2018
Patricia J. Freda Pietrobon graduated with her Biology degree from DeSales University (Allentown College, at the time) in 1977, and received the President’s Award from Father Dooling at commencement. 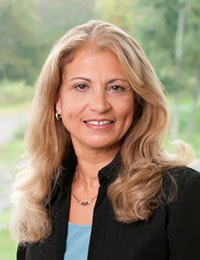 Patricia J. Freda Pietrobon graduated with her Biology degree from DeSalesUniversity (Allentown College, at the time) in 1977, and received the President’s Award from Father Dooling at commencement. Dr. Pietrobon earned a Master’s of Science degree in Biology/Immunology from Seton Hall University and a Ph.D. in Physiological Chemistry/Biochemistry from the Chemistry department at Lehigh University in 1983.

Dr. Pietrobon is Associate Vice President, Research and Development for Sanofi Pastuer, and is also Head of their global research program focusing on developing a new vaccine to combat the potentially deadly disease Clostridium difficile infection, commonly known as Cdiff. She has worked at Sanofi Pastuer for over 30 years and has contributed to the research, development, and licensure of various new and innovative vaccines effective against different infectious diseases. She is an advocate of Sanofi Pastuer’s mission of promoting the importance of vaccines and improving public health, and is a member of the Infectious Disease Society of America, the Anaerobe Society, the American Chemical Society, and the American Association for the Advancement of Science.

In addition to her work with vaccines, Dr. Pietrobon has published several scientific articles, including three book chapters on vaccine design and development, and also holds several patents. She is on Sanofi Pasteur’s Philanthropy Steering Committee, and has been a member of the Board of Directors for East Stroudsburg University of Pennsylvania’s Center for Research and Economic Development since 2006.

She met her husband Robert Pietrobon while at DeSales, where he graduated as an Economics major in 1978. They married in 1983 and live in Allentown. They have four children, three of whom are also DeSales alumni.