by David Oblas Nov 5, 2018
As a member of the first class to graduate from DeSales University, then Allentown College, Deacon George Kelly expresses how fortunate he is to have been able to matriculate and graduate with the class of 1969. 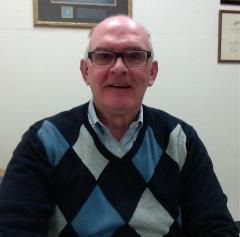 As a member of the first class to graduate from DeSales University, then Allentown College, Deacon George Kelly expresses how fortunate he is to have been able to matriculate and graduate with the class of 1969.

"We were a brave lot, coming to a cornfield with three partially finished buildings and a half dozen assorted old farmhouses and barns. The faculty was highly trained, very demanding and the curriculum was rigorous,” said Kelly. Kelly credits the Christian Humanist education at DeSales for having prepared him “for life, and for eternal life.”

After graduating from the University, Kelly taught history and theology at Becahi (Bethlehem Catholic) for ten years, where he additionally coached football, basketball, baseball, cross-country and volleyball.  During his teaching years, he married his college sweetheart, Joanne, whom he met at a Mixer on February 17, 1967. Kelly said, “We have been blessed with five children, all of whom graduated from here, as well.” His wife Joanne just recently retired from working at DSU, as well, where she managed the biology labs in the Hurd Center.

Kelly began his employment at DeSales in September of 1979, as Assistant Director of Development and Public Relation. He describes his years working here as “a precious gift from God, that is greatly treasured.” Having started at the school in 1965 with only 155 other men, Kelly was in for a big treat when he returned in 1979—the college had expanded tremendously with men, women, traditional and non-traditional, undergraduate and graduate students. When Kelly retired in 2015 the University had over 3,000 graduate and undergraduate students with a plethora of amenities and modern, beautiful comprising the vast campus. The only aspect that remained unchanged was the philosophy of education, which was still centered on finding the good in each student and drawing that good out, in order to produce graduates that would facilitate in making the world a better place.

The career accomplishment that he is most proud of is how is work here helped the University prosper and grow, where God continues to bless the Oblates and DeSales University in the years to come.  Kelly is currently an ordained deacon in the Catholic Church, serving at Our Lady of Perpetual Help in Bethlehem Township, PA. He lives his life by a famous quote from St. Francis DeSales: “What is the prize if it is not Jesus Christ?  How can you take hold of him if you do not follow him?” Kelly said that this is the University’s most fundamental mission, and that “with God’s grace poured out abundantly, DeSales will flourish endlessly in that mission.”