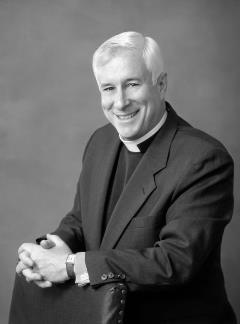 Entering Allentown College after a previous undergraduate experience, the Rev. Dr. David Williams became apart of the college community in its second year. With only three buildings in existence, Dooling, Wills and Brisson, Williams says that, “It was simple in that everything was well within our conceptual grasp, with campus life tightly circumscribed and intimate.” Within this tight-knit community, Williams gained many opportunities to come to the attention of the faculty—a common occurrence that is highly characteristic of DeSales University.

According to Williams, his Allentown College days helped him to understand that in taking a stand of any sort one needs to learn to be tasteful, considerate and courageous. “The school always had this equanimity of spirit about it that allowed for both progressives and conservatives to speak their minds,” says Williams. That same sense of equanimity has stayed with him ever since - being able to remain respectful of the varying responses when it comes to “hot button” issues. Williams says, “the truth of it was that I never gave theology a sideways glance until I was at Allentown, hence my interest in learning more about theology and its effect on all of us,realized or not.”

Later in Williams’ life, after seminary in Cambridge, Massachusetts and a doctorate from Andover Newton Theological Seminary (now housed at Yale Divinity School), he was ordained into the Episcopal Church ministry, and took his first professional job in ministry in Washington, DC. Williams says that he takes pride in the fact that that the one and only public speaking class at Allentown College was the only one he ever needed.He had the amazing opportunity once to “preach his little heart out” to President Ford, during a service at St.John’s Episcopal Church on Lafayette Square in Washington, D.C. while he was on staff there..

After 30 years of ministry and private practice of psychotherapy, and with others establishing a psychoanalytic institute while he completed eight years of post-doctoral work at the Washington School of Psychiatry, he was asked to become Rector of an Episcopal Church in downtown Charleston, South Carolina.

Williams credits Fr. Finnegan for unknowingly shaping his view of a living theology. Chiefly, however, Williams said that he owes a great deal of his gratitude and affection for Fr. Gambet, the Academic Dean at the time.Having had the privilege of experiencing many of the wonderful qualities of Fr. Gambet’s personality, Williams said that, “Fr. Gambet did many things that impressed me and that I have passed on to others. One gift that Fr.Gambet gave me was to teach me enough Greek to be able to get through my first year of Greek in seminary at the Episcopal Theological School in Cambridge, Massachusetts.

The summer after graduation Fr. Gambet and I would me on occasion as I worked my way through a Greek grammar book with him. As a result whenever I prepare to preach I always consult the Greek New Testament and often find ways to breathe new life into sermons as a result, sometimes surprising congregations with new meanings and understandings of Scripture.

”In his career as a therapist, priest, friend, Rector, consultant and administrator, Williams said that he developed a sense of “spirit and collegiality” within the world of the Oblate-led community of teachers and students, that began decades ago at Allentown College and continues today. “I am ever so proud of the fact that I came from there - a place of ‘second chances’ for some, and a stepping off point for the incalculable adventures of the future,” said Williams.

The last bit of advice that he offers is from none other than St. Francis DeSales himself. In times of uncertainty,Williams, said that the most reassuring and successful key to follow is simply this: “Be who you are and be that well.”