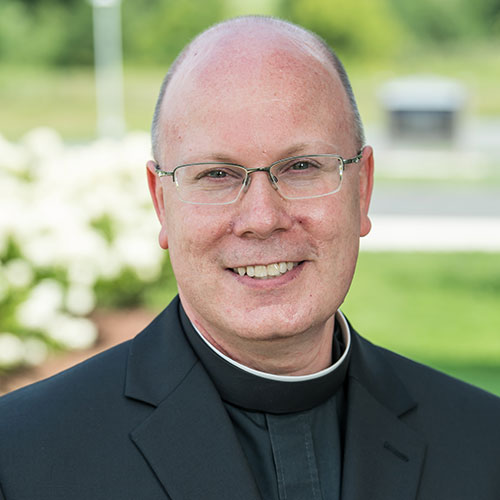 Brother Wisniewski is the Provost of DeSales University and an associate professor of mathematics. Prior to his current administrative role, he served as Head of the Division of Sciences & Mathematics (2015-2018) and Chair of the Department of Mathematics/Computer Science (2011-2015). Brother Dan earned a Ph.D. in mathematics from Bryn Mawr College, an M.A. in mathematics from Villanova University, an M.A. in Christian Spirituality from The Washington Theological Union, an M.Ed. in Academic Standards & Reform from DeSales University, and a B.S. in mathematics (summa cum laude, Phi Beta Kappa) from The Catholic University of America. He is also a graduate of Father Judge High School in Philadelphia, PA.

In several undergraduate and graduate programs of the University, Brother Dan enjoys teaching students in general education courses, mathematics majors in upper-level courses, and future mathematics teachers in the secondary education certification program (STEP).  In recent years, he has taught the following courses across all academic levels: Mathematics for Teachers, Survey of Mathematics, Fundamentals of Modern Geometry, Senior Coordinating Mathematics Seminar, Abstract Algebra, The Teaching of Mathematics in Secondary School, and Secondary Education in Mathematics.

Brother Dan’s research interests include number theory, mathematics education, the preparation of future teachers, and Salesian spirituality.  Some of his more recent publications include:

In 2013-2016, he was Editor of The Pentagon, the official journal of Kappa Mu Epsilon, the national mathematics honor society.  With two of his Oblate confreres, Brother Dan edited Love Is the Perfection of the Mind: Salesian Studies Presented to Alexander T. Pocetto, O.S.F.S., on the Occasion of His 90th Birthday (Center Valley, PA: Salesian Center for Faith & Culture, 2017), which includes his research article “Loving Acquiescence: St. Jane de Chantal’s Abandonment to Divine Providence in Times of Grief.”

The year 2021 marks several anniversaries for Brother Wisniewski: in addition to marking twenty years of service and ministry at DeSales University, it is also the 25th anniversary of his profession of vows as a religious brother of the Oblates of St. Francis de Sales, and 30 years since he graduated from Father Judge High School and entered the Oblate community.  He previously served the Oblates’ Wilmington-Philadelphia Province as a Provincial Councilor (2012-2018), and was a board member for the National Conference of Major Superiors of Men (CMSM).  Brother Dan currently serves on the Board of Trustees of Salesianum School in Wilmington, DE; the Editorial Committee on the Revision of the Constitutions of the Oblate Congregation; and, the Provincial Leadership Selection Process (PLSP) Committee for the Wilmington-Philadelphia Province.