It was morning when the loud clang of a makeshift bell rang out across the village. One by one, families filed into the room and sat down at an empty station. Clinic had just opened for the day.

Sasha Savkova, Allie Lundell, and Kayla Murawski were all waiting inside. The three physician assistant students were about to begin working amid the intense heat of Peru’s Amazon jungle.

The trio spent a week volunteering with Amazon Promise, a U.S.-based, non-profit organization that provides desperately needed medical and dental care to Peru’s most remote and vulnerable populations.

Nani Cuadrado, a former assistant professor who serves as a preceptor for students and who first volunteered with the organization as a student in DeSales’ physician assistant program, organized the trip and led the all-female team of students.

“As soon as I heard about it, I was sold,” says Murawski, who had been on three mission trips to Nicaragua in high school but never a medical one. “It didn’t take very much to convince me. I love travel and the ability to combine travel with service.”

Adds Savkova, “My first thought was, ‘I have to do that. I have to be there. I have to go on that trip.’” She had previously spent a week working with an ambulance crew in South Africa.

Lundell also had volunteer experience, having completed weeklong mission trips in the U.S., including one to New Orleans to rebuild houses after Hurricane Katrina. But this was different.

Knowing that this kind of experience does not happen often, Lundell wanted to immerse herself “in the Amazonian’s way of life and see how different medical care is in such a remote location and with limited resources.” 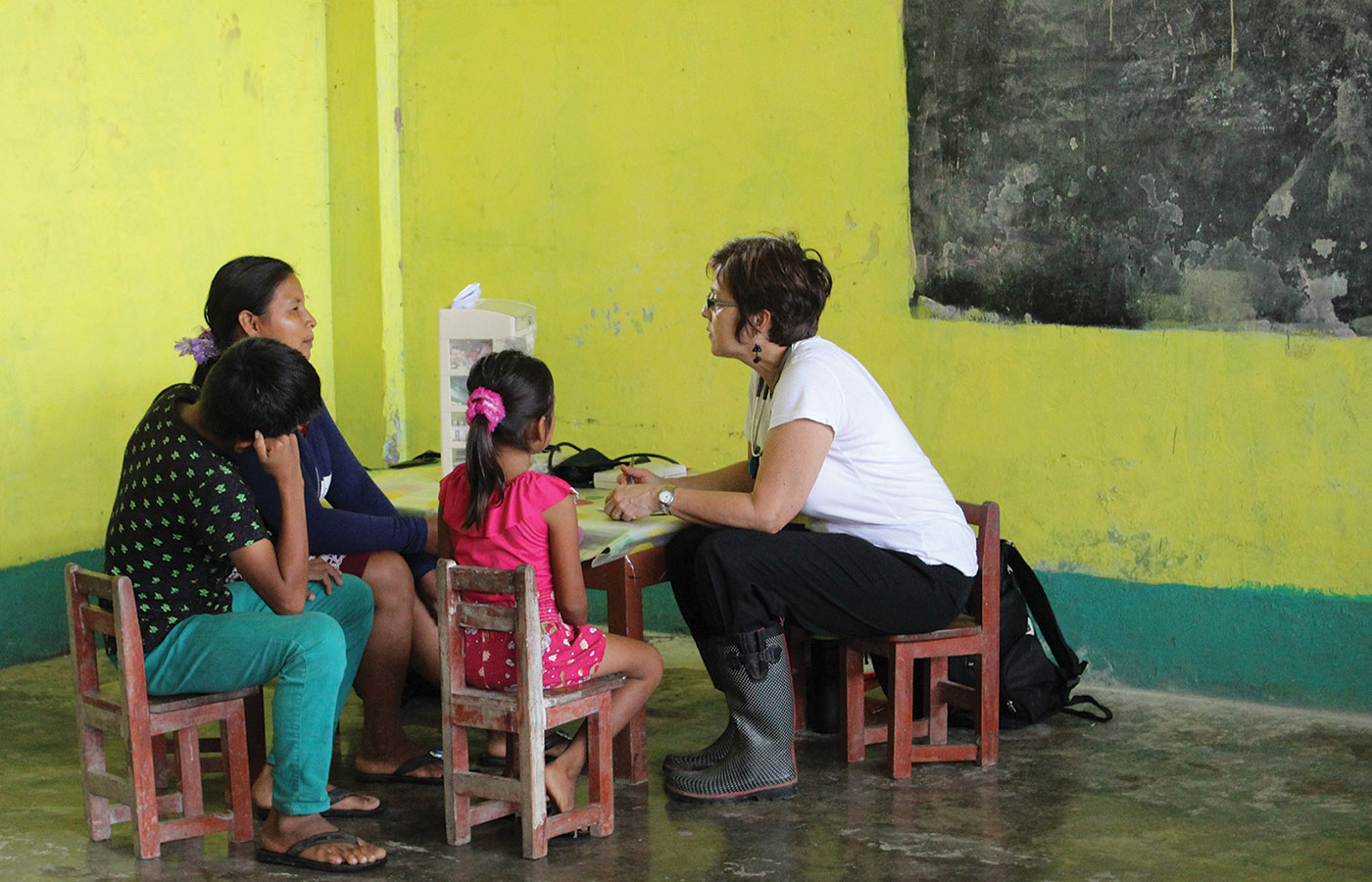 The Amazon Promise team consisted of more than a dozen people. Peruvian medical workers, translators, and other staff and volunteers joined the group from DeSales.

They set off on a two-hour bus ride from Iquitos to the town of Nauta, located on the Maranon River. From there, they traveled several hours by boat to the jungle village of Veinte de Enero, located in the Pacaya Samiria National Reserve, where they set up base camp.

Team members slept in tents inside one of the village’s few buildings. Once the sun set, a generator provided light for about two hours every night. Then they would have to rely on flashlights and headlamps.

The building had two western toilets but no running water. Bathing consisted of wet wipes or nightly swims in the muddy river.

“We felt lucky to have a toilet that needed to be flushed by dumping a bucket of rainwater in rather than using a hole in the ground or one built over the river,” says Lundell.

In the jungle, mosquitoes were always buzzing around and team members were advised to wear knee-high rubber boots while walking on the grass to guard against chiggers and other insects. At one point, a team member counted a total of 68 bug bites on her body.

“There were certain parts that were just a little bit uncomfortable,” says Murawski. “Between the heat, bugs, and lack of hand washing.”

One morning, a loud scream echoed throughout the building. Murawski and Savkova had awakened to find a tarantula crawling on their door. Thankfully, one of the Amazon Promise volunteers came to the rescue, using a branch to calmly escort the giant spider back outside.

As if the critters and creatures of the Amazon weren’t enough to scare most people away, volunteers also had to survive the scorching heat. Oral rehydration salts were a must, since water and Gatorade alone wouldn’t prevent dehydration. The heat was so intense that by day three, a Peruvian doctor had to be sent home early due to severe dehydration. 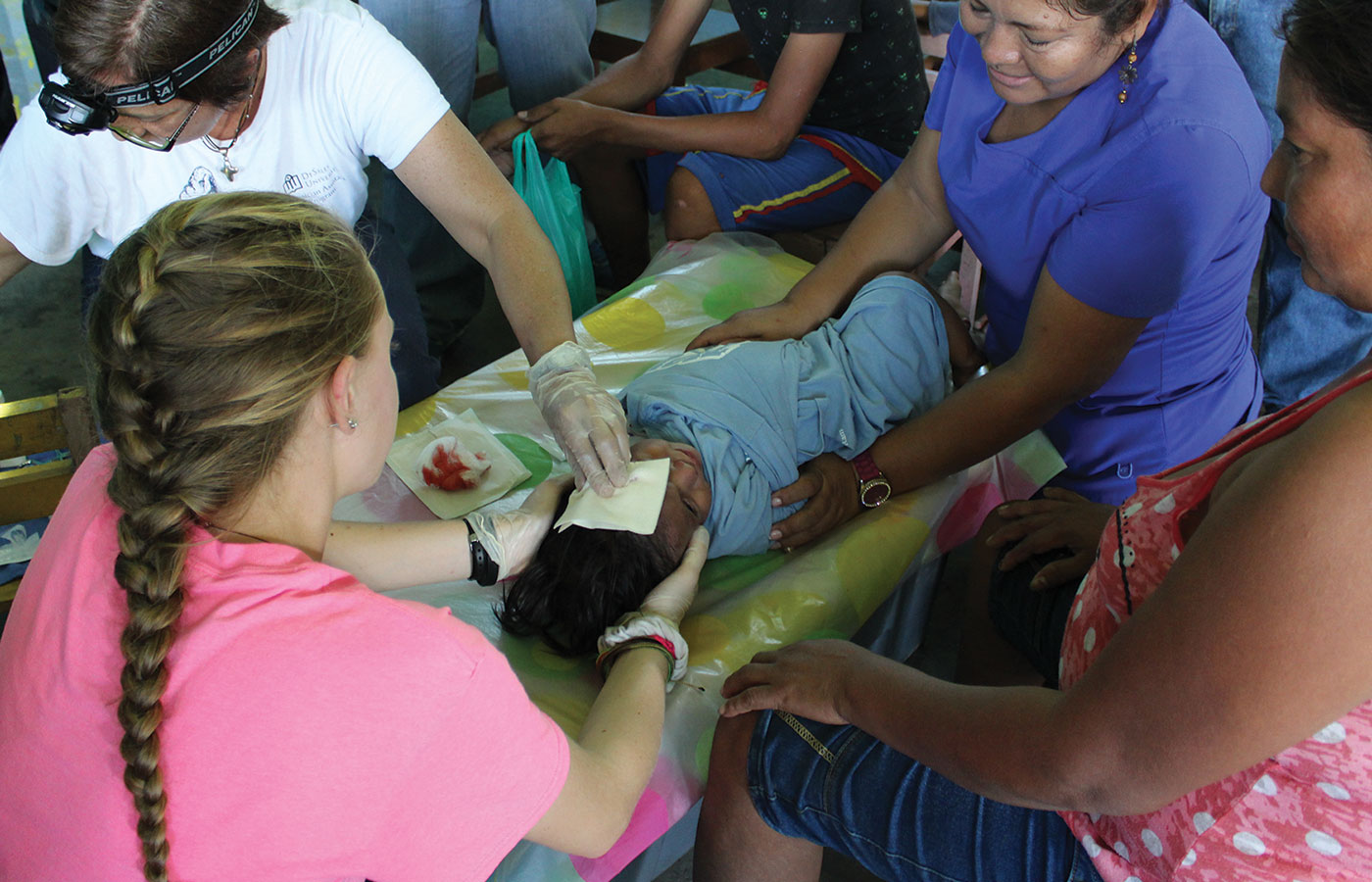 The group traveled by boat each day to a different village to hold clinic. The clinics were typically set up in a schoolhouse and were divided into different stations, where the PA students and Peruvian medical professionals would provide care.

Villagers came to the clinics for a variety of illnesses. Some had minor issues like back pain, headaches, and allergies while others had to be treated for malnutrition, parasites, and scabies. Many needed teeth pulled, which Lundell, Murawski, and Savkova each learned how to do working alongside the Peruvian dentist. Then, there were the sickest patients.

A man with malaria, who was also anemic and had very low blood pressure, had to be put on an IV. “When he came in and sat at the table in front of Nani and me, he couldn’t hold himself up,” Murawski says. “He was slumped over.”

The man received three liters of fluids, one of which contained sugar. He was also given some food and pain medication. “Had we not been there, I honestly don’t know if he would have survived,” says Murawski. “He probably would have just become septic, which is very sad.”

Another man came into the clinic with an inguinal hernia. He wasn’t in pain and the hernia could be pushed back into his body. But the man had hoped that medication could fix the problem. “We had to explain to him that unfortunately with this type of condition, the only way to fix it would be to have surgery,” Lundell says.

She recommended that he limit any heavy lifting. But that simply wasn’t possible. “It was challenging to hear him say that due to his work, he could not realistically stop doing heavy lifting. Also, he was really hoping for some type of medication to prevent complications because he did not have enough money to travel to the nearest city for medical care.”

After leaving the jungle, the team made one final stop—a home visit—to check in on a cancer patient named Rita. “She explained to us that she had ovarian cancer, but it soon became clear how advanced the cancer was, and how little she truly understood of her condition,” says Savkova.

The cancer had spread into Rita’s bones and larynx, preventing her from walking or speaking normally. She asked the team when she would get better. They knew the answer and did the only thing they could—pray.

“There was somber silence and tears shed,” Savkova says. “We all wished we could have done more. But sometimes, it's not for you to treat a patient or cure them; sometimes the best thing you can do to care for someone is just to be there for them in the moment and listen.”

Savkova and Lundell are beginning their careers after graduating from the PA program, while Murawski is currently in her junior year at DeSales. All three women vow to continue mission work in the Amazon and beyond.